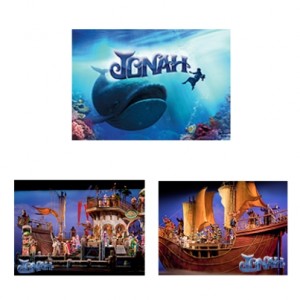 Jonah is a spectacular,fun and inspirational entertainment experience.

After seeing the promotional video for “Jonah,” taken during its performances in Lancaster, PA and getting an informal “sneak preview,” of the sets during a behind the scenes tour last week; it is with eager anticipation that I await the Branson premier of Sight and Sound’s production of Jonah, on March 22. I have seen all of Sight and Sounds spectacular productions, “Noah the Musical,” “Joseph,” and the “Miracle of Christmas,” but, based on what I have seen and heard so far, even among that group of outstanding shows, “Jonah” is going to be something special.

I am not the only one who feels that way. Dan Deal, who ought to know because he is the shows Director and Associate Producer said that Jonah, “Is probably the most high energy vibrant and pretty show that we have ever done. It is a nonstop energy packed powerful story that takes off and keeps running just like Jonah himself does the whole way through. You will be surrounded by the show and engulfed by the underwater experience. From start to finish the show is jammed packed. It is fun, it’s funny, it’s endearing, it’s powerful and its life changing.”

All my life I have heard the story described as “Jonah and the whale,” but in reality what scripture says is that “The Lord appointed ‘a great fish’ to swallow Jonah, and Jonah was in the stomach of the fish three days and three nights.” After standing on stage and looking into the mouth of the “great fish” and sensing the excitement of Mike Pitman, Sales Manager for Sight and Sound Theatres, as he described the show and how everything comes together, or in some cases, “breaks apart,” in this exciting, entertaining and inspirational show all this writer can say is, “Everyone is going to have a ‘whale’ of a time as ‘one of the bibles most misdirected prophets’ attempts to run and avoid that which he knows God would have him do.”

As Jonah does so, Sight and Sounds 300 foot stage surrounds the audience on three sides and, excuse the pun, really “immerses” the audience in the action, not only during the spectacular underwater scene, but throughout the show. Follow Jonah from lavish royal palaces into the belly of the big fish as spectacular 40 foot tall sets, beautiful costuming, amazing special effects and an extremely talented cast present the adventures of one of God’s prophets, as he attempts to run from the will of God and comes to realize the true meaning of God’s mercy, in what promises to be a one of a kind, spectacular, powerful, colorful and fun filled inspirational entertainment experience.