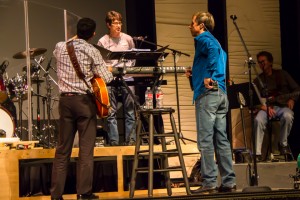 Three questions that come up a lot, particularly at this time of the year are “How do Branson shows keep their material fresh and exciting from year to year?” “How much of their material changes from year to year?” “Will I see the same show this year that I saw last year?” Based on my personal experience over the last 28 years, in the majority of cases, the short answers to those questions, in order are, “Hard work and effort,” “lots” and “No.”

Over the years it has been my privilege to talk about this subject with a number of different long time Branson shows including Presleys’ Country Jubilee, Clay Cooper’ Country Express, Shoji Tabuchi, Duttons, Haygoods and many more. Without exception, each spends a large part of the “off season” developing routines, numbers, costuming, special effects, lighting and other things that they believe will make their shows relevant, fresh, exciting and new while retaining those elements that their audiences like the most and look forward to them performing.

I caught up with the Rankin Brothers, Mark and Matt, the stars of one of Branson’s most entertaining shows and their dad, Larry, who is also their manager, as they were rehearsing for their 2014 show opening March 5 in the Yakov Smirnoff Theatre. These early season rehearsals are a far cry from the full scale production Branson visitors see in the actual show. No sets, special effects or costuming just the grinding work of slowly working out and putting together each element of the show.

The Rankin rehearsal was no exception. Mark and Matt were on a bare stage with their band informally working through some of the numbers that will be in the show. It’s a very informal, but purposeful process with a lot of repetitiveness to get it just the way they want it. As I watched Matt going through the dance steps and singing for just one part of one piece, time after time while interfacing with Mark and the band to make adjustments, I could not help, but have a renewed appreciation for the dedication that the Rankins, as well as the majority of other Branson performers, have for their craft and giving their audiences the very best experience they can.

As Mark took a quick break I asked him how much of the show would be changed this year. He replied, “About 70-80 percent. Among lots of others, we are adding 30 new songs including ‘I Get Around’ by the Beach Boys; a new Frankie Valli segment including ‘Let’s Hang On’ and ‘Ragdoll;’ a Shania Twain segment; as well as bringing back the ‘American Trilogy’ and ‘How Great Thou Art.’ In the Elvis segment.”

After Mark went back on stage to continue the rehearsal, Larry Rankin pointed out that the nature of their show and the hits associated music of the 50’s through the 90’s gives them a lot of flexibility to continually add new material to the show. He said, “Although we have a lot of new material in the show this year we have been very careful to keep those numbers and segments that our audiences have come to love and look forward to such as ‘The Anchor Holds.’ Our feeling is that if it is memorable enough to be a favorite of those who have seen the show before it’s a great number to share with new guests coming to the show.

Having seen the Rankin Brothers show a number of times I can truly say it is a wonderful feel good show presented by one of the most talented casts in Branson who take their audiences on “a wonderful musical journey through the classic music hits and super stars of the 50s through the 90s bringing back memories of this this timeless music performed as only they can do it.” The Rankin Brothers start their 2014 Branson shows on March 5.

For additional information on the Rankin Brothers show, or for information or tickets for any of Branson’s shows and attractions or for lodging arrangements, please contact the Branson Tourism Center, one of Branson’s largest and most respected vacation planning services by calling 1-800-785-1550.