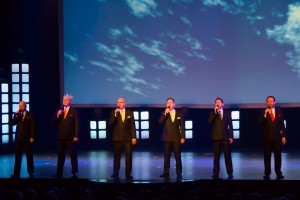 SIX, Owen, left , Kevin, Jak, Lynn, Curtis, and Barry during the gospel segment of the show.

As many times as I have seen the amazing show SIX, I find myself looking for the band that is not there. This, even though I know that every sound I hear comes from the six human voices of siblings, Barry, Kevin, Owen, Lynn, Curtis and Jak Knudsen who make up the entire cast of one of Branson’s hottest shows, SIX. It was no different on the afternoon of May 20th, 2014 as I experienced the vocal magic of SIX performing their 2014 Branson show.

If you have never seen the show it’s hard to describe because it’s much more than a vocal band. It is a total entertainment experience consisting of great vocals covering a wide variety of music from the 60s to the present performed by an amazing “band” consisting of the same performers singing the vocals and doing the comedy. Their energy, familial harmonies and humor, coupled with the vocal band aspect of their show results in an an awesome entertainment experience that is certainly unique in Branson if not in all the world.

From the time the curtain goes up to the last number one or more, in most cases more, of SIX is on the stage entertaining. That might not seem remarkable, but when one considers that whether it’s a drum beating, a beautiful vocal or the brothers telling stories and providing a warm wonderful comedic element to the show, it is just the six of them and they do it virtually non-stop, except for intermission, for two hours.

It’s not just what they do, but how they do it. As demonstrated numerous times during the show by, among others, the performance of “Stand By Me” by Curtis; Coldplay’s “Fix You,” featuring Owen or Lynn featured in the song “Love Times Ten,” each has been blessed with a remarkable vocal talent. When that individual talent blends together in numbers such as “People of the World,” “America” and the gospel segment, the power and familial harmony is, simply put, “A joy to hear.” 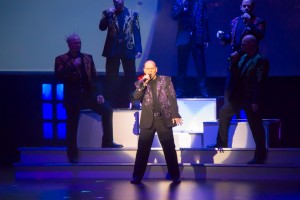 Owen, is the “drum” in the band as well as an accomplished vocalist.

One minute Owen is “a drum” doing “Wipe out” and the next he is performing a beautiful rendition of “Fix You” and that’s just one of “six. “Multiply that talent and versatility by six and you begin to get an idea of just how unique and special this show is.

The comedy, mostly provided by Jak interacting with the audience or one of his brothers is funny and comfortable because much of it relates back to them. Like the vocals, that familial element takes something that is already funny and makes it a unique and special part of the total SIX entertainment experience. A perfect example is Jak and Barry, with the musical backup of the rest of the group in the “Mr. Hollywood,” segment. From the comedy to the vocals, in total, it is a vintage SIX “moment.”

From songs as varied as “The Lion Sleeps Tonight and “Pretty Woman” to “Fix You,” “Viva Las Vegas” and many more the shows choice of music will have something for just about every musical taste. Its Veterans segment with Kevin featured in “I’m An American Soldier” and their performance of “America;” their performance of “Love Times Ten,” dedicated to their mother who died all too early from Cancer and the show gospel segment are as inspirational and touching as they were powerfully and beautifully performed.

The lighting, sound and interactive use of the giant screen on the back of the stage as well as the side monitors all added significantly to the enjoyment of the show. SIX is one of the most popular shows in Branson and, to this writer, the unique, powerful high energy performance he saw today is the reason why.

For additional information or tickets for SIX please contact the Branson Tourism Center, one of Branson’s largest and most respected vacation planning services by calling 1-800-785-1550 or through its website, www.BransonTourismCenter.com .