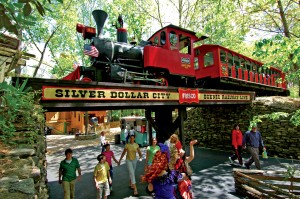 You’ve experienced one or more of the things mentioned below. When most of us tell someone we have been to a major tourist destination there are generally certain places or things that come up in the conversation. It’s hard to imagine mentioning that you have been to New York City, particularly to someone who has been there before, and not having one or more of the following com up as part of the conversation the “Statute of Liberty,” “Broadway,” the “Empire State Building,” the “911 site” or other key things New York City is noted for.

While certainly not on the same size scale as New York City, Branson has been named as one of the top 25 U.S. Travel Destinations and, like the mention of New York City or other major travel destinations, has certain places or things that come to mind when discussing a visit to Branson. Based on a history that started with visiting Branson in 1976 and living in Branson since 1986, it would be my opinion that most discussions about having visited Branson would include at least one or more of the following:

Branson’s Spirit: It would be hard for me to imagine that the same spirit of hospitality and values that drew me back to Branson year after year, until I finally moved here over 28 years ago, would not be a special memory of a Branson visit. In my opinion, Branson’s spirit and unabashed love of family, God, country and our military; coupled with a sincere desire and commitment to insure that every Branson visitor has a great Branson experience would be something that most people who visit Branson would feel, appreciate and associate with what makes Branson so special.

The Branson Strip: Located on Highway 76, called by some “Country Music Boulevard,” the “Branson Strip” is where most of Branson’s theatres and major attractions are located. It is said that Branson “has more seats than Broadway” and its signage, particularly at night, reminds one of Las Vegas, but its entertainment, personality, value and spirit is rooted in the history and tradition of the Ozarks and family.

Silver Dollar City: This award winning 1880’s styled theme park is Branson’s oldest continually operated attraction and is easily its most popular paid attraction. It features dozens of rides, including the record setting wooden coaster, “Outlaw Run” and its “Wildfire” coaster; practicing craftsmen; shows; six world class festivals including “An Old Time Christmas,” and everything else one would expect from a world class theme park.

Titanic Museum Attraction: The iconic, two story, ½ size, replica of the Titanic opened in 2006 and dominates the intersection of State Highway 165 and the Branson Strip. This permanent museum holds hundreds of Titanic artifacts in its many galleries and is an interactive adventure that makes the guests part of their own Titanic experience from beginning to end.

Tanger Outlet Mall: It might seem strange to list an outlet mall as one of the things people who visit Branson are more than likely to talk about, but its central location in the middle of the Branson Strip, the fact that its Branson’s biggest outlet mall and one of the most popular shopping destinations in Branson combine to put it on the list.

Branson’s Live Shows: Although certainly not everyone who comes to Branson attends one of its live shows, the vast majority do and just about everyone who has visited Branson is aware of its shows. From the Acrobats of China and Jonah to Clay Coopers Country Express, Shoji Tabuchi, The Haygoods, Legends in Concert, SIX and dozens more, Branson has a variety, quantity and quality of shows that is unmatched by any travel destination anywhere near its size.

Presleys’ Theatre: Home of the Presleys’ Country Jubilee, the theatre was the first theatre on the Branson Strip in 1967. Two of its current cast members, Drummer, Steve Presley and comedian, “Herkimer,” Gary Presley have been performing continuously since that time.