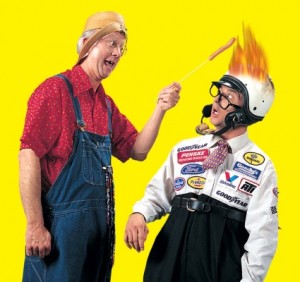 Gary Presley, “Herkimer” with son Erik, “Cecil” in one of their hilarious skits.

BRANSON, Mo., June 27, 2014 – Offering shows as diverse as the Acrobats of China to Jonah, Mickey Gilley, the Haygoods and Presleys’ Country Jubilee, Branson’s reputation for the variety, quantity and quality of its shows is unmatched by travel destinations anywhere near its size. Primarily known for its music shows covering just about every musical genre, Branson also offers some of the most unique, funny and family friendly comedy available anywhere.

Comedy has been a major part of the Branson shows ever since the Baldknobbers “started it all” with its mixture of music and comedy. Here is an overview of five of Branson’s best comedians from four of its most popular shows:

1. Gary Presley of Presleys’ Country Jubilee has been entertaining Branson audiences ever since the Presleys’ opened the first theatre on what is now known as “The Branson Strip” in 1967 with its mixture of music and comedy. Known on stage as “Herkimer,” Gary is the consummate master of his craft, and with a combination of his unique style of humor and “Ozark hillbilly” costume has been making Branson audiences laugh longer than any other comedian on the Branson strip. Along with his son Erik, Presley “,Cecil” on stage, and a combination of comedy skits, one liners, jokes on current events and other common topics, action routines, some great props, and special effects, this creative comedy duo keeps audiences of all ages laughing and wondering about what’s coming next. 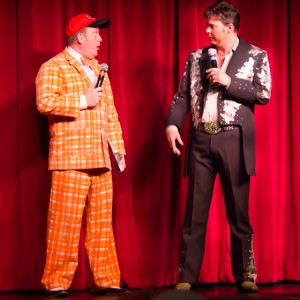 2. Paul Harris, the comedian in Paul Harris & The Cleverlys Show, has been having Branson audiences “busting their guts” laughing for over 20 years. Paul’s style is standup comedy and boy is he ever funny. Where else will you find out why it’s not a great idea to go swimming with a Sperm Whale? His comedy has that good old boy comfort of Jeff Foxworthy, turns almost anything worth talking about into an occasion of laughter and while “‘cutting edge’ he always walks the line and keeps his show clean.”

3. Jarrett Dougherty, currently performing with the Billy Dean Live Show, is another very funny man who will have you laughing from the beginning to the end of the show with his comedy. His comedy is most often presented through the various “characters” he becomes and often involves a straight man. It will have you laughing and sitting on the edge of your seat wondering what he is going to come up with next, but one thing is for sure, this is one funny guy.

4. The multitalented Jamie Haage does a hilariously funny job of playing “Jim Dandy” and providing the comedy in the Grand Jubilee show. You’ve heard of “dark comedy,” well welcome to “orange comedy,” where, strategically placed throughout the show, Jim Dandy, along with his straight man, the shows Emcee Mike Patrick, will have you laughing until you hurt with a blend of comedy and one liners.

For additional information or tickets on the shows mentioned in the article please feel free to contact the Branson Tourism Center, one of Branson’s largest and most respected vacation planning services by calling 1-800-785-1550 or through its website, www.BransonTourismCenter.com.