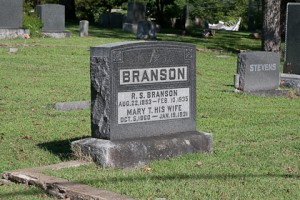 The gravestone of Ruben S. Branson is readily visible driving by the NW corner of Oklahoma and Commercial Streets in historic downtown Branson.

“Branson” is known, and justly so, as a top tourist destination because of all it has to offer in terms of beautiful scenery, pristine lakes, exciting shows, attractions, shopping and so much more. In fact, so much so that it made the top 25 List of U.S. Destinations in “TripAdvisors® 6th Annual Traveler’s Choice Destination Awards: along with cities such as New York, Orlando, and New Orleans.”

With “Branson” being as popular as it is, we thought it would be interesting to share some information about the history of how it got its name and the difference between the “city of Branson” and “Branson:”

1. Ruben S. Branson was not the founder of “Branson:” In about 1882, Ruben S. Branson opened a general store near the mouth of Roark Creek and the White River to service those in the area that were already here. He had a post office in the store. Anyone want to take a guess at the official name of that post office?

2. Branson is named after its first “Post Office:” Not surprisingly Ruben S. Branson named the post office in his store, “Branson” and even though he moved away, the name stuck, well, kind of.

3. “Branson” almost became “Lucia:” In the early 1900s, as the railroad came into the “Branson area,” there were competing interests trying to get land and plat towns. The first town platted was “Lucia” on October 2, 1903 with the town of “Branson” platted soon after on October 26, 1903. Charles Fulbright and his “Branson Town Company” acquired both town sites by the end of 1903, but the official records of the U.S. Post Office indicate that the name of the “Branson” Post Office was changed from “Branson” to “Lucia” in 1902. It was changed back to “Branson” in 1904.

5. “Branson” and “the city of Branson” are two different entities: Many people have been coming to “Branson” for decades to go to Silver Dollar City, Table Rock Lake and other areas. To this day, Silver Dollar City and the vast majority of Table Rock Lake are outside of the city limits of Branson. In fact, when the Presleys built the first theatre on what is now known as the “Branson Strip” and started performing their iconic show, Presleys’ Country Jubilee in 1967, it was outside of the city limits of Branson. As tourism expanded, along with the need for services, the city of Branson annexed the surrounding areas which now includes the entire theatre district, the famed “Branson Strip” and the majority of Branson’s attractions.