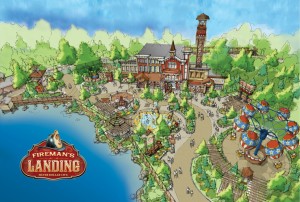 “Sounds like the new $8 million ‘Fireman’s Landing’ will add new meaning to ‘blazing’ fun, excitement and adventure at Silver Dollar City starting in 2015,” said Tammy Johnson, the General Manager for the Branson Tourism Center. The new area, which will have six new family rides and four interactive play zones, all themed around “the spirit and training of community volunteer firefighters,” was announced at a press conference at the park on Aug. 13.

In introducing the expansion, Brad Thomas, the General Manager of the 1890’s theme park, said the story line for “Fireman’s Landing” will be loosely based on the fire that destroyed the town, [Marmaros] where Silver Dollar City is currently located and the desires of the citizens to train a volunteer fire brigade so that it never happens again. It will be themed to “recognize the contributions of the community heroes who serve as firefighters” and as “an 1880’s volunteer recruitment fair with rides and attractions for ages 3 to 93.”

Thomas could scarce contain his excitement as he said, “We love our visitors and our visitors continue to support us when we do fun and exciting things for them.” He pointed out that one of the most exciting things for him about “Fireman’s Landing” is that “families will be able to have fun together and we love it when we can bring families together and allow them to have fun as a family unit.”

He illustrated the “fun together” aspect by using two of the new “tower drop” rides, “Fireman’s Firefall” and “Up the Ladder.” “Fireman’s Fall” takes bigger kids and adults 80 feet into the air for a beautiful view of the Ozark Mountains; “But,” says Thomas, “you’ve got to keep your eyes open because in a second you go from 80 feet in the air all the way to the ground.” “Up the Ladder,” is a smaller version of the tower drop ride designed to let some of the smaller members of the family have a similar experience.

He also pointed out the “Roundabout,” where some of the smallest children will be able to sit in “Dalmatians” and go around a fire hydrant. A smile spread over his face as he said, “I think it’s going to be one of the most popular rides at Silver Dollar City.” Other rides and attractions, including a soaring balloon ride called “Fire Spotter” and the “Firehouse Splash Yard,” with squirting water jets and pump hoses; are located near  “Fire Station #3” which has a number of attractions including “‘Firefighter’s Fire Drill,’ with buckets, pumpers, foam ball cannons and targets for showering mock fires; ‘Firefighter’s Fire Escape,’ an obstacle course of tubes, mazes, climbing structures and slides and ‘Firefighter’s Junior Fire Escape,’ a soft play area for toddlers.”

The completion and opening of “Fireman’s Landing,” will bring the total number of Silver Dollar City’s rides and attractions to over 40 and increase the parks “ride capacity” to 21,000 per hour. With the addition of “Fireman’s Landing” and its family orientation to everything else the park offers, it’s easy to understand why Silver Dollar City believes that 2015 will be the park’s “biggest family year ever.”