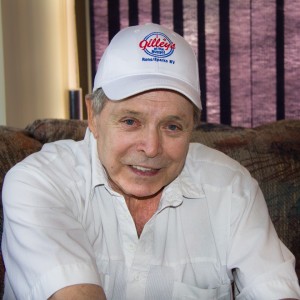 Mickey Gilley during in depth interview.

National entertainment legend, Mickey Gilley came to Branson in the early 90s and is starting his 26th year in Branson in 2015. Known for his honky-tonk piano playing style and a string of 17 Number 1 hits, this country music icon, even in the face of a paralyzing injury, which would have put a lesser man down, is starring in the Mickey Gilley show. Along with the “Urbanettes” and the “Urban Cowboy Band,” this consummate entertainer, with his genuine talent, warmth and smile provides an unforgettable memorable one of a kind musical entertainment experience.

“Branson – Up Close and Personal,” is a service of the Branson Tourism Center, one of Branson’s largest and most respected vacation planning services, and is intended to provide readers with an up close and personal look at a Branson star or personality. The interview with Mickey Gilley (MG) uses a “Question and Answer” format with the interviewing being done for the Branson Tourism Center (BTC) by Gary J. Groman, a 28 year resident of the Branson area, local columnist and free-lance writer.

BTC: What is your favorite childhood memory?
MG: Telling my sister that I was not going to go to the back of the house while she was sweeping and cleaning the front room floors. I grabbed the door and shook it and she ran after me. The race was on, and I outran her.

BTC: Of all the hits you have had which one is your personal favorite and why?
MG: That’s a hard one to answer because my fans have given me 17 top ten songs. I will say that “Room Full of Roses” has a special place in my heart, “Don’t The Girls All Get Prettier At Closing Time” was the best song ever given to me and that my favorite recording and one of my favorite records is “That’s All That Matters To Me.”

BTC: What one song do you enjoy performing the most?
MG: “Stand By Me,” a beautiful song, from the soundtrack of “The Urban Cowboy.” I am using to close my show this year.

BTC: Of all the professional moments and performances you have had, which has meant the most to you?
MG: When I met Conway Twitty in 1974 and opened a show for him in my night club in Pasadena, TX.

BTC: Do you have a little known fact about yourself that you think our readers would enjoy hearing about?
MG: In 1959 I had a chart record, “Is It Wrong For Loving You,” that Kenny Rogers played the base on. Also, probably a lot of people don’t know that I had Commercial Pilot and Instrument Ratings and have flown my airplane for over 8,000 hours. I am also in the process of bringing Gilleys Beer back on the market.

BTC: If you could perform on stage with any other performer, living or dead, who would it be?
MG: Elvis Presley because he was always one of my favorites.

BTC: What is your favorite part in your current Branson show?
MG: When we do the music from the soundtrack of “Urban Cowboy” because it has some great music in it.

BTC: What was your first impression of Branson?
MG: Was wondering what was going on in this little town that I had never heard of.

BTC: In what year did you open your own theatre?
MG: Jim Thomas opened the “Mickey Gilley Theatre” in 1989 and in 1990 I it took over.

BTC: How many years have you been performing in Branson?
MG: This is my 25th year.

BTC: Are you celebrating that in a special way?
MG: We’ve got a celebration coming up on October 5th. We are going to start at 2:00 p.m. and go until the ending. I don’t know how long that’s going to be, but we have a lot of other people coming in to celebrate with us. I don’t know who they are because it’s supposed to be a surprise.

BTC: What relationship is Jerry Lee Lewis to you?
MG: First Cousin.

BTC: Did either, separately or together, have any influence on your decision to become an entertainer?
MG: Jerry Lee Lewis.

BTC: How?
MG: He played piano, sang and had “hits” in the 50’s. I was making $1.25 per hour doing construction work and when I saw the kind of money he was making I thought, “If he can do it I can too” and decided to jump in. What I didn’t realize at the time, was that everyone was going to compare me to my cousin Jerry Lee Lewis. Actually, although I didn’t think about it at the time, in essence, what I was doing was performing a tribute to Jerry Lee Lewis and I was successful because I could do his music.

BTC: How long have you been performing professionally?
MG: Since 1957.

BTC: Where and when did you make your first professional appearance?
MG: That’s hard to pinpoint, but the first successful run I had in a “nightclub” was at The “Nesadel Club”, located on Spencer Highway in Pasadena Texas from 1960 to 1970. I worked six nights a week, did four sets a night and played piano, organ and sang along with a little three piece band.

BTC: When did “Gilley’s open?
MG: In 1971. I had decided to throw in the towel as far as recording goes and a partner and I started “Gilleys,” a honkytonk bar located on Spencer Highway not too far from the “Nesadel Club,”. In the first month in business with him I made more money than I had made since I had been in the music business period.

BTC: How did you get back in the recording business?
MG: In 1973 the lady who had the juke boxes in the club wanted me to record the song, “She Called Me Baby All-Night Long.” I told her I had not made a record in three and a half to four years, but I went in and made the recording for her putting “Room Full of Roses” on the flip, “B,” side. It took off locally in the Houston area in 1973 and became my first national hit in 1974.

BTC: What made you decide to open a theatre in Branson?
MG: My friend Jim Thomas thought it would be a good mix with those who were already  performing here and I was ready to get off the road.

BTC: You have been recovering from a horrific injury suffered in 2009. In terms of 100% how close are you to where you want to be?
MG: I’m about 80% recovered. I am walking performing and doing pretty well except that I can’t play the keyboards. My ultimate goal is to play golf again and play the  piano, but I think I will probably make the golf course before I make the piano.

BTC: Anything else you want our readers to know?
MG: I would like them to know that Branson has some great entertainers and shows, we have a lot of wonderful people who are trying very hard to please the people who come to Branson and with all the great things it has to offer is a great place to come to vacation. I would like to invite everyone,  “To come and see us.”