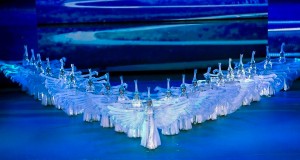 The Swan Dance was a wonderful example of the beauty and elegance of this show.

After having seen The Adventures of Marco Polo last week I can say that it is a remarkable and unique show the likes of which has never been seen on a Branson stage before. This spectacular production, through the use of a 2000 square foot LED screen, an extremely talented international cast of over 60 dancers, acrobats and other performers, over 300 colorful costume changes and magnificent sets, vividly and colorfully brings the essence of Marco Polo’s epic 20 year plus adventures in central Asia and China to life on the stage all wrapped in a touching love story.

The panoramic sweep of the production, in terms of what it covers, is amazing. From one of the most dramatic and action filled shipwreck scenes most people will ever see on a stage, to Marco’s near death in the cold snows of Mongolia, his rescue by the Princess Sa Ren, his time amid the grandeur of the court of the China’s Kublai Khan and his travel throughout Asia this production is a “cultural experience” filled with pageantry; beautiful dancing, featuring ballet and a variety of other dances all impeccably performed by the shows cast. It makes no difference if it’s an exquisite ballet duet or an ensemble number, each is superbly performed with a grace, precision and beauty that is almost spellbinding.

You do want to be in your seat for the start of the show as Marco starts his adventure and ends up in a shipwreck. The integration of lighting, sound, special effects and acrobatics of the crew with the huge 2000 square foot LED screen across the back of the stage results in one of the most exciting beginnings to any show that I have ever seen in Branson. 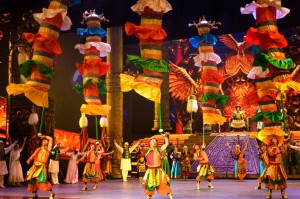 This scene from the court of Kublai Khan is, but one example of the shows exciting pageantry and color.

The shows format does not involve any spoken parts by the cast, English or otherwise. The audience is guided from one scene to the next by a short introductory narrative, in English, that explains what it is that is being portrayed next. The cast’s communication with the audience, whether using ballet, another form of dancing, acrobatics or other action, is through their performance with no dialogue, but it was easy to follow and it did not impact on my enjoyment of the show.

In the first half of the show Marco travels from Venice to China; delivers a message from the Pope to China’s Kublai Khan in Dadu, China, which is today named “Beijing” and develops his relationship with the “Great Kahn.” The journey takes years during which he is involved in a ship wreck, almost dies in the snowy cold of a Mongolian winter and is rescued by the Princess Sa Ren, with whom he falls in love during his recovery and has to leave to continue his journey.

During the second half, as Marco travels China serving the Kublai Kahn, the story is told with a mixture of dance and “cirque” as performers are infused into the performance at different times with the Chinese Boomerang; the Diabolo, Chinese Yoyo, a unique Chair Stacking Act and other surprises. Marco is reunited with Sa Ran, but is all too soon separated from her as he is required by Kublai Khan to escort another Chinese Princess to Persia to be married to a Persian monarch. Marco is never to return to China.

The poignant ending to the show, features a very old Marco still dreaming of Sa Ren and a beautifully orchestrated ending to the story that is at the same time sad, but fulfilling. It is a spectacular, touching and beautiful ending to the show involving an absolutely exquisite dance, the LED screen, special effects and a high flying Silk Routine and one that touched my heart.

The Adventures of Marco Polo is a wonderful cultural experience, based on an historical event that most are familiar with that is presented through one of the most spectacular productions every to appear on a Branson stage. For additional information or tickets for The Adventures of Marco Polo please call the Branson Tourism Center by calling 1-800-785-1550 or through its website, www.BransonTourismCenter.