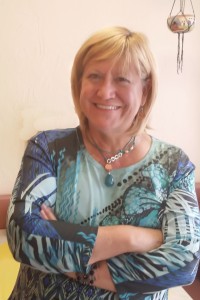 Susan Abar, author, artisan, entrepreneur and a living example of why “In God We Trust.”

That might seem like an odd headline, but along with “two pennies” and a trust in God, “Against All Odds” is not only the name of a book that Susan Abar wrote telling her remarkable story of courage, endurance and faith, but an accurate summary of what her chances were of living; let alone ever opening and operating a gift shop in historic downtown Branson or, for that matter, anywhere else. “The Copper Coin,” operated with her husband Ron, sells many gifts, but its spirit is based on our National Motto, “In God We Trust,” and the shop features a line of custom jewelry and other gift items incorporating a single copper penny into their design, delivering that message in an exclusive and beautiful way.

Perhaps the way I came across this story tells the message of why the Copper Coin is so special and helps make Branson the unique wonderful place it is, to not only live, but visit. I was talking with Annette Wood, Director of Sales and Marketing for the Branson Tourism Center, and she slid a key ring with a beautiful charm on it across her desk. The charm had a shiny cooper penny inlaid inside a rectangular case with an American Flag. She told me that two of her Group Mangers, Randi McCormick and Melissa McGowan, had received it from the owners of the “Copper Coin” while they were discussing the “2015 Branson.Com Honors Purple Heart Recipients” which will be held in Branson on April 23-25, 2015.

Wood pointed out that McCormick and McGowan were amazed to hear that the “Copper Coin,” which sells the key ring in their store, gives them away free to any Veteran who comes in and asks for one. As they talked with the owner and she shared her story of how the penny and “In God We Trust” became the focal point for her calling to design and market her exclusive jewelry line and gifts, they became even more amazed. When Wood told me the story, I decided that I just had to meet with this extraordinary woman, write a piece about what she and her husband were doing for Veterans and thank them.

The first day I went into the Copper Coin Susan and Ron were off, but when asked the lady that was there if it was true, that every Veteran who came into the store could get the patriotic “In God We Trust” key ring for free she said, “Yes, are you a Veteran?” I replied, “Yes” and with that she reached up on the wall, where the key rings were selling , took one down, handed it to me and, with a big smile on her face, said, “Thank you for your service.”

Two day later, when I went back into the shop to meet Susan and Ron, she was waiting on a customer. As I waited I saw that the book, “Against All Odds,” the story of “Two pennies, A Rainbow and a Woman Called Mercy” by Susan Abar was for sale in the shop. Initially I did not know that its author was the woman I was waiting to meet, but as I waited for her to finish chatting with the customer and ring up their order, I saw her autographing the book and kind of put two and two together.

When I got to meet her, she was kind enough to go with me to get a cup of coffee and chat. Although, I went to do the story about their gift to Veterans I would be remiss, it I did not point out that the gift started with a woman who, within about a six month period, lost her job, found out she had breast cancer, had a Mastectomy and then found out she also had Pancreatic Cancer. “Against All Odds,” she persevered  and, because of a surrender, two pennies, a rainbow and a woman named Mercy, became part of what most of us would call a miracle.

When I asked her about her gift to the Veterans she said, “We give them to our Veterans and Active Duty military personnel to show our appreciation for the sacrifices that they make for our country.” She pointed out, that from a personal perspective it honors the service of her father, husband and her son and daughter in law, both of whom are on active duty in the Army.

The “focal point” of the key ring, part of her exclusive line of jewelry, is the “charm” involving the penny, and the motto “In God We Trust,” which was designed by Susan. From the prepping of the penny and assembly to the application of the resin and its setup time, each piece, is processed by hand by Susan and her husband and takes about three hours to complete.

The Copper Coin is yet another example of unique variety that makes shopping in Branson such a wonderful experience. Open 9 a.m. through 5 p.m. Monday through Saturday, it is located in Historic Downtown Branson at 109 N. Commercial St.