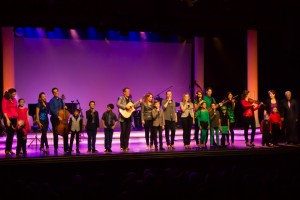 The Duttons, with Benjamin and Brande Dutton, in blue to the left.

After seeing one of the last Branson performances of the fabulous Dutton’s Christmas show prior to them leaving for their winter season shows in Mesa, AZ, I interviewed Benjamin Dutton for a “Branson Up Close and Personal” piece which will be published in February. Maybe it was the influence of just having experienced the Dutton family performing together or the Christmas feeling, spirit and emotion it evoked, but his response to one of the questions I routinely ask, even though not a Christmas question, just touched my heart as a special Christmas blessing.

When I asked Benjamin, “What do you like best about performing in Branson?” he instantly replied, “What I like best about performing in Branson is the opportunity to make a living with my family. To have the opportunity that I have to go to work every day with my wife and my children and for my children to relate every day with their grandparents, their cousins and their aunts and uncles. Economics tend to draw families apart because people go to where the jobs are. It’s very rare in this day and age that a whole family can work together side by side and that has afforded so many blessings that I will be eternally grateful for. I could not have asked for anything better.”

Even as I write these words, the sincerity, emotion, and genuineness that I felt and the look of happiness and contentment I saw on his face comes rushing back. I doubt there will be a kid in this whole country that will have more joy on their face over the gifts they receive this Christmas then I saw on Benjamin’s face as he answered that question.

I sensed that he knows he has been given a special gift, but doesn’t take it for granted. He loves and appreciates that gift every day, not only in terms of his wife Brande, of whom he said, “When I think about Brande I think I am the most blessed man in the world,” and their four sons, Benjamin, Isaac, Christian and Luke, but his mom, dad, brothers, sisters nieces and nephews.

Benjamin’s response is a reminder, as we exchange gifts this Christmas that we might have already received one of the most valuable gifts of all, the relationships with the very people with whom we are exchanging gifts. Let us appreciate those relationships, not take them for granted and, I believe, like Benjamin, celebrate “Christmas” every day.

Note: The Duttons will be performing in their Mesa Arizona Shows through April 4 and debut their 2015 Branson show in Branson on April 8.