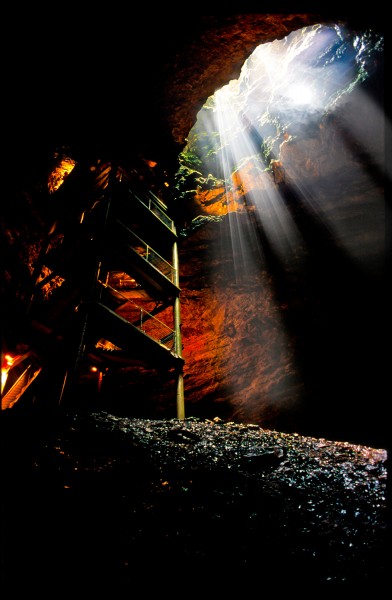 Looking back toward the top of the Marvel Cave while descending into the cave.*

The tourist destination of Branson, Missouri has been evolving for over 115 years into the wonderful place that enables millions to be entertained, have fun and create special family memories that will last a lifetime. Today Branson visitors have a marvelous choice of attractions, live shows and activities, all surrounded by pristine lakes and the beauty of the Ozark Mountains, that is unrivaled anywhere. Yet, it wasn’t always that way and started its evolution from the place the Osage Indians called “Devil’s Den.”

Osage legend has it that the name came about when a young bear hunter and a bear fought on the edge of a great hole and fell into it one evening. When they came back the next day all they saw was blackness and a hole that seemed to have no bottom, hence legend says, the name “Devil’s Den.” Legend also speaks of early Spanish explorers exploring the cave, but the first recorded record of the caves exploration was in 1869 as the result of an expedition lead by Henry T. Blow, of St. Louis, who was involved with lead mining.

At that time, as it had been since the days of the Osage and before, the cave’s access was through a big sink hole through which those exploring the cave were lowered. Although they did not find lead, they thought they had seen “marble” in the ceiling of the cave and named it “Marble Cave.” A “bat guano” mining operation developed along with the very small town of “Marmaros” near the mouth of the cave, but the mining operation had ceased and the town had burned down when William Lynch, along with his two young daughters, Genevieve and Miriam, purchased it and began operating it as an Ozark tourist attraction in 1894.

Lynch, ran the cave with his daughters until his death in 1927. The name of the cave was changed to “Marvel Cave” shortly after his death and his two daughters operated the attraction until leasing it to the “Herschend family,” Hugo, Mary and their two teenage sons, Jack and Peter, in the mid 1950’s. The Herschend family has operated it continually since.

“After signing a 99 year lease, the Herschends made many improvements to the cave, but wanted something for people to do up on the surface while they were waiting to tour the cave. Hugo’s vision was to have Ozark craftsmen demonstrating their crafts. That vision, along with some insight about Marmaros were the seeds which were planted and nourished by the Herschend family and blossomed into an 1880s themed town named “Silver Dollar City,” located at the entrance to the cave, which opened May 1, 1960.” The rest is history.

Tours of Marvel Cave, a National Natural Landmark and Branson’s oldest continuously operated attraction, are still conducted daily and are actually included in the price of admission to Silver Dollar City. The 60 minute walking tours depart every half hour and are guided by trained cave guides who take visitors over 500 feet below the surface into the “wet limestone cave” via a combination of stairs, trail and ramps. Once at the bottom, cave visitors get a half mile ride back to the surface via a unique “cable train” installed in 1957.

For additional information on Silver Dollar City, Marvel Cave, or other Branson shows and attractions or Branson lodging please feel free to contact the Branson Tourism Center by either calling their toll free number 1-800-785-1550 or through their website www.BransonTourismCenter.com.