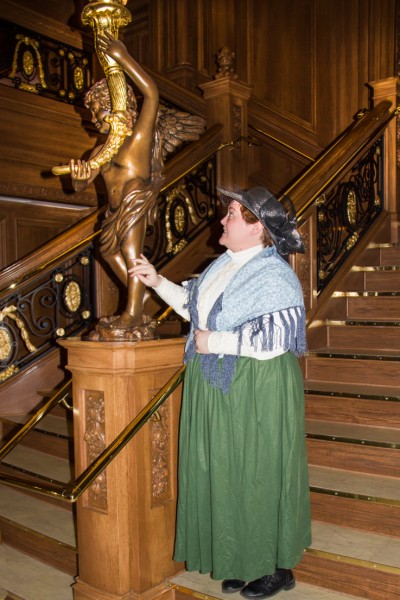 Miss McDermott admiring the statute at the foot the Titanic’s Grand Staircase.

The “Irish Celebration on the Titanic” is  Branson’s Titanic Museum Attraction’s (Titanic) annual celebration and remembrance of Ireland’s involvement with the “RMS Titanic” lasting the entire month of March. The “hat” and “Bridgette Delia McDermott,” both their story and the way it is presented, not only tells the story of one of the luckiest people aboard the ship that night, but illustrates just how special the Irish Celebration on the Titanic is.

From the ships conception to the tragic end of her first and last voyage on the night of April 14 and into the early morning hours of April 15 of 1912 when she hit an iceberg and sunk into the icy depths of the North Atlantic, “Ireland” and the “Irish” have been an integral part of the Titanic’s history. She was built in Belfast, Northern, Ireland in about three years, by Harland and Wolff, the shipbuilders for White Star Line, through the efforts of over 3,000 workers, most of them Irish.

When she left her last port of call prior to starting her fateful voyage across the North Atlantic it was from Queenstown, on the south coast of County Cork, Ireland. On board were 184 Irish passengers and crew of which 14 were from the little Irish parish of Addergoole, near Ballina in County Mayo and one of those was Third Class Passenger, Bridgette Delia McDermott, who had a brand new hat with her that her mother had purchased for her just before she left.

Every day, the “crew” of the Titanic Museum Attraction and the museum itself remember and tell the stories of those who were on the ship, let today’s passengers experience a taste of the adventure and excitement of that voyage and provide their “passengers” one of the most unique and memorable entertainment experiences available in Branson. During March, the Titanic’s Irish Celebration enhances that experience with its crew donning period costumes and “becoming” one of the passengers during the celebration.

Folks, this is a Legends in Concert  quality type of experience. When you met and talk with them it seems so real and its more than just the costumes; they really “know who they are,” I had the pleasure of meeting and talking with “Miss Bridgette Delia Mc Dermott, a 28 year old passenger.

She explained, that like a lot of people in Ireland at the time, it was her dream to come to America even though, in that time and place, it meant leaving your home and family and probably never seeing them again. She boarded the ship at Queenstown with 13 other people from the small parish of Addergoole. Prior to boarding the ship she had gone shopping with her mother who had brought her a new hat because her mother had said, “All ladies in America wear hats and gloves.”

When asked about what happened when the ship hit the iceberg she said she came up on deck with others who had been told there was nothing to worry about. When they determined that there was a problem, she was one of the first on a lifeboat because she was already on deck.

As soon as she got in the boat she noticed that she did not have the hat her mother had brought her and jumped out of the lifeboat, went to her cabin and got the hat. When she returned, the boat was long gone and one of the last boats was already being lowered. She said that she went down a “rope ladder” and dropped 15 feet into the boat.

“Miss McDermott pointed out that of the 14 people from Addergoole, only she and two other women survived. As part of this year’s Irish Celebration the Titanic is premiering a video telling the Addergoole story including how it has preserved the memories of the “14” for over 100 years.