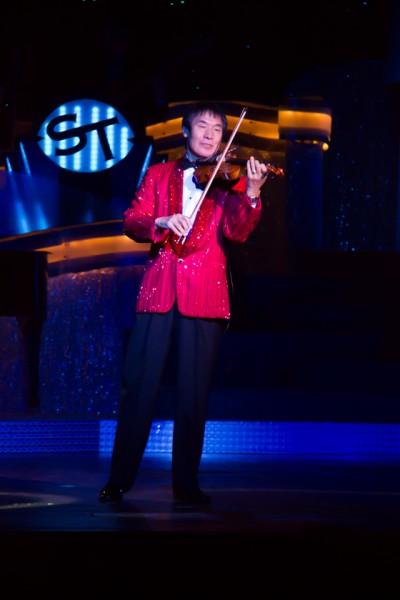 The incredible Shoji Tabuchi during a non Bigfoot moment.

If you asked ten people in Branson the question, “Of all the Branson entertainers which, group or entertainer, is least likely to be involved with the Animal Planet TV show Finding Bigfoot?” I’m betting it would be Branson’s master violinist and fiddle player, “Shoji Tabuchi.” Yet, earlier this week when I talked with him about a rumor that he was going to be a guest on the show, he confirmed the rumor, but said he could not discuss any of the specific details.

Tabuchi said that he is excited about being on the show and is really looking forward to it. He explained that he has an open mind about the existence of a “Sasquatch” or “Bigfoot” as well as UFOs and the Loch Ness Monster and, with a twinkle in his eye, asked, “Who knows?”

What skill set does Shoji have that could be of interest to Bigfoot’s investigative Team? Don’t know for sure, but one of the cast members and founders of the Bigfoot Field Researchers Organization is a recognized authority on “Bigfoot” and is noted for his innovative use of sound “as a technique for locating Bigfoots.”

On March 6, there was a “Finding Bigfoot” meeting at the White House Theatre in Branson, which it could be presumed, was as a preamble to the Ozark’s area filming of material for Finding Bigfoot. Cliff Barackman, one of the co-hosts of the show was present as people shared information about seeing what they believed were sasquatch foot prints, an actual Bigfoot or other evidence that could assist the Investigative Team in deciding what areas to look for a potential Ozark’s Bigfoot. Could it be that the “Blue Man of Spring Creek” actually existed?”

The team consists of James “BoBo” Fray, a commercial fisherman by trade, who says he saw his first sasquatch in 2001; Cliff Barackman who analyses and interprets data, especially those related to Bigfoot footprints and owns one of the largest Bigfoot cast collection in the country; Matt Moneymaker who has been involved actively in Bigfoot research since the 1990s, launched the Bigfoot Field Researchers Organization website as well as being a very respected Bigfoot Researcher and Ranae Holland, a research biologist who, although she does not believe in Bigfoot, co-hosts of the show and is “fascinated by the phenomenon and excited to have found a way to combine her scientific knowledge, fieldwork skills, and love of the wilderness to investigate alleged sightings.”

Although there has been no announced date as to when the episode with Shoji will air on Animal Planet’s Finding Bigfoot, Sasquatches aside, we do know one thing for sure; the 2015 season for the Shoji Tabuchi Show in Branson kicks off on April 17.