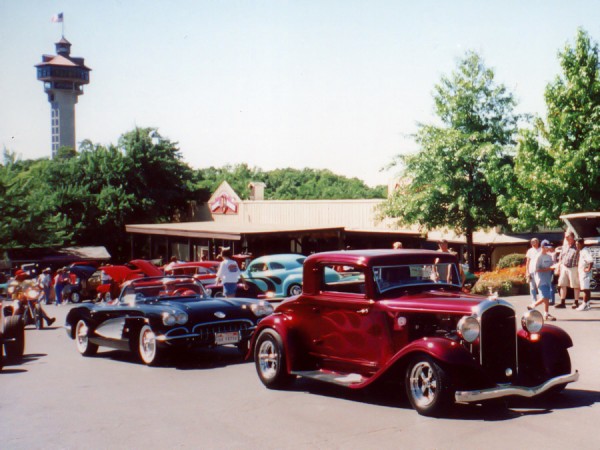 Just a sample of the vintage cars that will be on display during the “Show and Shine” and in the Midnight Cruise.”

“The Shepherd of the Hills Super Summer Cruise with its ‘Show & Shine’ and ‘Midnight Cruise’ is one of Branson’s most popular summer events,” said Annette Wood, the Director of Sales and Marketing for the Branson Tourism Center. “The three day event will be held at the “Shepherd of the Hills Homestead” from Aug. 10 through Aug. 13, 2016, with the start of the “Midnight Cruise,” its last event on the 13th,” she added.

Thousands will line the Shepherd of Hills Expressway to see the hundreds of cars and trucks that will participate in the unique “Midnight Cruise,” which will follow the same route it used last year. The vehicles will enter the “Cruise Route” at the western end of the Shepherd of the Hills Expressway at midnight on Aug. 13 and proceed down the expressway, past the Shoji Tabuchi and Pierce Arrow Theatres to its conclusion at Roark Valley Road. Wood points out that the event is so popular that many put up chairs along the cruise route hours before it begins.

As popular as the “Midnight Cruise” is, it’s only part of an event that draws car enthusiasts from all over the country. Hundreds of beautifully presented and maintained “Modified” and “Stock” trucks and cars will be on display at the Homestead for the daily “Vehicle Show & Shine” from 8:00 a.m. through 5:00 p.m. each day. Simultaneously, they will also be judged for awards in over 19 “Classes” such as “1900 – 1934 Stock & Street Rod Autos,” “1963 – 1968 Modified Muscle Cars,” “Corvettes All Years,” “Stock Trucks All Years,” and others; “Special Awards” including “Most Unusual Paint Job,” “Best Use of Color,” “Most Radical Engine,” to name a few, and of course, the awards for “Best of Show,” “First Runner Up” and “Second Runner Up.” The “Best of Show Awards” will take place starting at 4:00 p.m. on Aug. 13 along with the “Drivers Briefing for the Cruise.”

There is a maximum of 105 points available, 20 points for each of the five categories Exterior, Drive Train, Interior, Engine, and Customization plus an extra 5 Bonus Points for Safety, Hazard and emergency supplies. The “Best of Show Awards” are scheduled to be presented at the Shepherd of the Hills’ Pavilion Theatre starting at 4:00 p.m. on Saturday August 13.

She also reminds those traveling north on State Highways 265 toward Highway 76 or on Highway 76, whether planning on attending the “Super Summer Cruise” at the Homestead, going to Silver Dollar City or elsewhere during the period August 10 through Aug. 13 to allow a little extra time because of the increased traffic that is anticipated, especially on August 12 and 13.

For additional information on “Super Summer Cruise” or any of Branson’s shows and attractions or for lodging arrangements please feel free to contact the Branson Tourism Center by either calling their toll free number 1-800-785-1550 or through their website www.BransonTourismCenter.com.