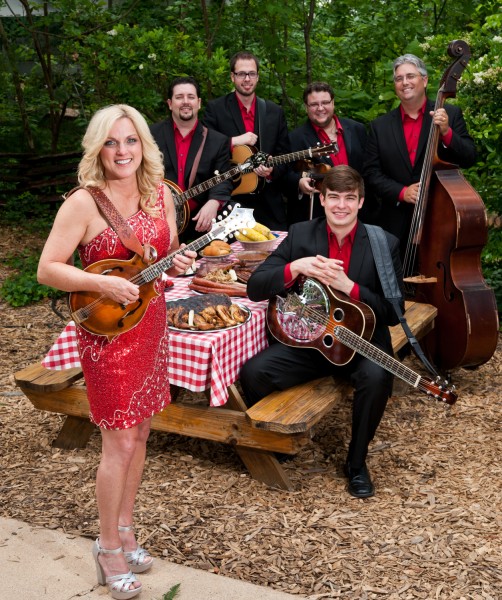 Seven time IBMA Female vocalist of the year, Rhonda Vincent and her award winning band “The Rage” is just one of 40 groups performing throughout Silver Dollar City’s “Bluegrass & BBQ.”

Silver Dollar City’s “Bluegrass and BBQ” (Festival). The Festival combines the fun and excitement of an award winning world class theme park with a Bluegrass music event that has been awarded the “Bluegrass Event of the Year” by the International Bluegrass Music Association (IBMA) and the great tastes of a variety of succulent slow cooked BBQ. Bluegrass and BBQ begins on May 7 and runs through Memorial Day, May 25.

In terms of Bluegrass music there is nothing like it. Nancy Cardwell, the Executive Director of the IBMA, 2012-2014, said that the Festival “presents more bluegrass bands on multiple stages to more new audiences than any other event in the nation.” This year the Festival will feature “more than 40 bands on multiple stages throughout the park, with international award-winning musicians, Grammy nominees, fan favorites and chart-climbing new bands coming for the festival.”

“Newer artists include Flatt Lonesome, Driven, The Lindsey Family, The Baker Family and The Willis Clan, featured on America’s Got Talent and starring in their own show on the TLC network. Unique artists include The Kruger Brothers, bluegrass musicians from Switzerland, whose repertoire ranges from traditional bluegrass to Bach to R&B songs.

“Spotlighting the next generation of bluegrass talent, the park presents an annual Youth in Bluegrass band contest, set for May 23, with 21 bands from around the country competing for honors.” It should be noted that the performers will be appearing at different times during the Festival. Click here for a complete schedule of performances. 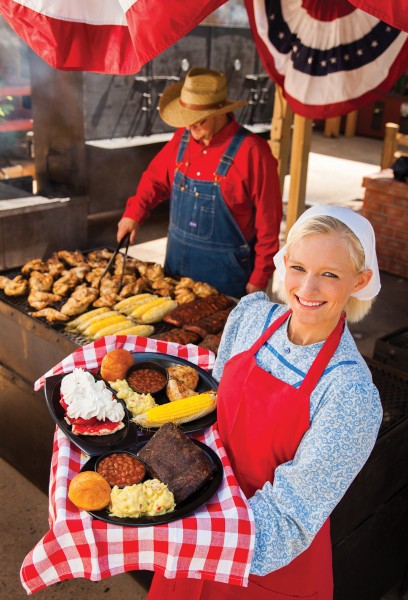 There will be plenty of mouth watering BBQ and the “fixins.”

Of course some of the finest BBQ around plays a big part in the Festival. “The House of BBQ,” located in the “Red Gold Heritage Hall,” features a variety of BBQ including slow-cooked pulled pork, ribs, chicken and brisket cooked on the parks massive 20-foot wood-fired smoker. Its new “Rib Extravaganza” features a variety of preparations such as Memphis Dry Rub – Traditional Spices; Root Beer Glaze – Sweet & Subtle; Cajun Rub – A Taste of New Orleans and Hawaiian Style – Mango-Pineapple Glaze. Want an all you can eat “Rib Fest?” Then the “All-You-Care-To-Eat Rib Feast,” in “Reunion Hall” located right next to “Molly’s Mill Restaurant,” served family style, from 3:00 p.m. until closing each day, fits the bill. The BBQ associated with the Festival is in addition to all of the other excellent food served throughout the park on a daily basis.

“But it gets better,” said Annette Wood, the Director of Sales and Marketing for the Branson Tourism Center. “All of the music and BBQ featured during the Festival is in addition to everything else the award winning 1880s styled theme park is famous for,” she added.

Silver Dollar City has over 40 rides and attractions, with four world class coasters, including it’s wooden coaster, “Outlaw Run,” with its initial 162 foot 81 degree drop and number seven ranking on the list of the “World’s Top 50 Wood Coasters;” dozens of demonstrating craftsmen; unique shopping and great live shows and entertainment. New in 2015 is the nearly two acre, $8 million Fireman’s Landing, with six new rides and four interactive activities designed for “kids ages 3 to 93!”

For additional information on Silver Dollar City or its “Bluegrass & BBQ Festival,” or any of Branson’s other shows and attractions or for lodging arrangements please contact the Branson Tourism Center by either calling their toll free number 1-800-785-1550 or through their website www.BransonTourismCenter.com.