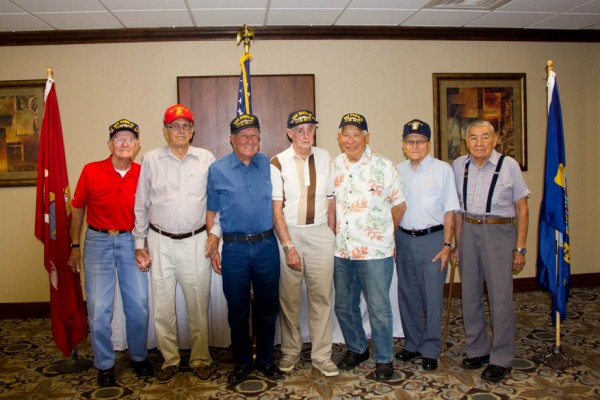 Recently, the crew of the “Lucky Lady,” more formally known as the U.S.S. Santa Fe (CL-60), a Cleveland class light cruiser, celebrated their 70th Annual Reunion in Branson, Missouri. Melissa McGowan, a Group Sales Manager for the Branson Tourism Center Groups Department, worked with the group in planning and conducting the reunion. She said, “It’s always an honor and privilege to work with our military groups, but this group was special.”

“It was an absolute pleasure to be with them and to hear them talk about what they experienced aboard the Santa Fe during World War II. It changed me. Of the over 1300 plus crewmembers who sailed on the ‘Lucky Lady’ throughout the war, only seven were able to attend the reunion: Richard Champagne, Clifford Hamilton, Ivan Cannon, Robert Hazelwood, Stephen Wong, Charles Bright, and Steve Downing Jr. The oldest was 92 and the youngest was 89. Precious heroes; I love them!”

When the Santa Fe, named after the city of Santa Fe, New Mexico, was christened, the traditional bottle of champagne was not used. Instead, the bottle was filled with water taken from the Santa Fe River that had been blessed by Santa Fe’s archbishop. That, and the appropriateness of the ship’s nickname, “Lucky Lady,” came to mind many times as the crew and family members of crew members who have passed, shared some of their experiences. Remarkably, the Santa Fe and her crew fought their way through 224,999 miles of battles, air raids, kamikaze, and torpedo attacks in the Pacific Theatre during World War II without the death of a single crew member due to battle injuries!

How lucky or blessed were they? How about having a torpedo hit the bow of the ship near a gun turret, surrounded by ammunition, that failed to explode? The crew said that if it had exploded they would have lost the bow of the ship. Imagine a kamikaze torpedo plane coming at the ship and being blown out of the sky by the ship’s guns about two seconds before it would have crashed into the ship. It was so close that gas from the plane sprayed aboard, injuring crew-members and killing one non-crew member that the ship had previously rescued. They all agreed that if the plane had remained airborne for two more seconds, very few, if any of them, would have survived.

During one air attack, the aircraft carrier USS Franklin was bombed by a Japanese plane, was on fire, and was in danger of sinking as she listed horribly. The Santa Fe and her crew, in a daring move of extraordinary courage and seamanship, pulled alongside the badly damaged ship, and maintained its position for over three hours, amid fires and exploding ammunition, with the towering aircraft carrier listing over it, as they rescued more than 800 members of its crew.

For her action with the Franklin, the Santa Fe received a Navy Unit Citation. That was in addition to the 13 Battle Stars she received for service from the Aleutian Islands to Tarawa, Wake, Iwo Jima, Okinawa, and just about every other major sea raid and battle conducted in the Pacific Theatre during World War II.

The U.S.S. Santa Fe 7 Reunion was held in the beautiful Grand Plaza Hotel in Branson from September 22 through 26; the hotel’s Montclair Room was made available for meetings, dinners, and fellowship. Their schedule allowed plenty of free time to shop, relax, and enjoy the comradery and fellowship of their shipmates, family, and friends. In addition, there were planned events and meals, along with the opportunity to ride the Branson Scenic Railway, experience the adventure of dinner and a show aboard the Showboat Branson Belle on Table Rock Lake, and to see the fabulous Legends in Concert show.

Branson Tourism Center’s McGowan said, “It was an honor to work with them and, although just for a while, get to know them. I hope they enjoyed their time in Branson as much as we enjoyed having them!”