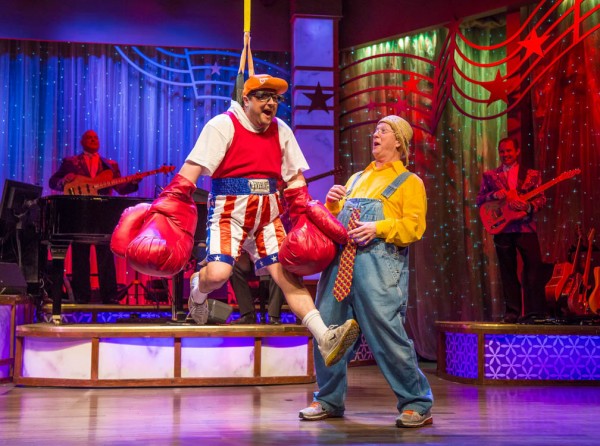 The high energy humor of Herkimer, right, and Cecil delights both young and old.

“Presleys’ Country Jubilee is our show of the week for Oct. 12, 2015,” said Annette Wood, the Director of Sales and Marketing for the Branson Tourism Center, one of Branson’s largest and most respected vacation planning services, and sellers of over 4.5 million Branson show and attraction tickets. “For the better part of five decades, the Presley family has been a leader in promoting Branson, its shows, and everything else it has to offer, while presenting a show filled with color, music, comedy, and production that has not only set a standard for others to follow, but has become one of Branson’s most beloved and popular shows,” she added.

In a recent review of Presleys’ Country Jubilee, I said, “From the time you walk into the theatre until the curtain goes down, a night with the Presley family at Presleys’ Country Jubilee is an unequalled entertainment experience! As you enter one of the most home-like theatre lobbies in Branson, you’ll hear the sounds of gospel music drifting down from the pre-show gospel sing-along in the loft; smell glazed almonds and pecans made from a secret recipe developed by Cecil, a.k.a. Eric Presley, and begin to realize that you and your family are in for a special evening.”

When the curtain rises, you become part of a Branson phenomenon as its first show on the now famous Branson Strip, does what it has continually been doing since 1967…wow the audience with its unique combination of music and comedy, presented by some of the most talented vocalists, musicians, and comedians in Branson. You’ll be treated to a spectacular evening of current and classic country songs and gospel greats, as well as the side-splitting, slapstick antics of Branson’s dynamic duo of comedy, Herkimer and Cecil!

Since the Presleys’ opened on the Branson Strip, Gary Presley, known on the stage as “Herkimer,” has been making the show’s audiences laugh ‘til they hurt! In combination with his son, Eric, “Cecil” in the show, their comedy is a unique blend of Ozark humor, one-liners, high energy, and skits that always seem to be relevant to current events.

When that comedy is strategically interwoven with the musical performances, the result is a one of a kind entertainment experience that keeps the audience, kids and adults alike, completely entertained, laughing, and wondering what to expect next! The Springfield News Leader proclaimed Presleys’ Country Jubilee to be “the standard by which other shows are judged,” and after seeing this show, you’ll know why!

For more information or tickets for the Presleys’ Country Jubilee, or any of Branson’s other shows and attractions, or for lodging arrangements, please feel free to contact the Branson Tourism Center by calling 1-800-785-1550 or visiting www.BransonTourismCenter.com.