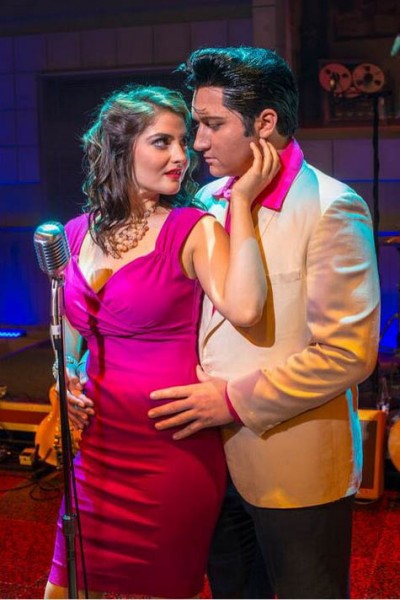 Dana Parker as Dyanne, with Elvis, Tyler K. Hunter, in scene from the “Million Dollar Quartet.”

Branson’s newest hit show, Million Dollar Quartet, brings a legendary night to the Branson stage in a show that combines music everyone already knows with a great story, creating a one of a kind entertainment experience. It’s based on one of the greatest jam sessions in rock n’ roll history; an impromptu gathering of four young recording legends-to-be: Carl Perkins, Elvis Presley, Johnny Cash, and Jerry Lee Lewis, that took place on December 4, 1956 in the Memphis storefront recording studio of Sun Records.

With the four, soon to be stars, that night was a young Las Vegas dancer who accompanied Elvis Presley. Dana Parker, as Dyanne in the Million Dollar Quartet, does a great job of not only representing that girl, but of interacting with the four musical icons and Sam Phillips, both musically and dramatically, adding a special dynamic to the other elements that make this show a not-to-be-missed Branson experience.

“Branson – Up Close and Personal” is a service of Branson Tourism Center, one of Branson’s largest and most respected vacation planning services, and is intended to provide readers with an up close and personal look at a Branson star or personality. The interview with Dana Parker (DP) uses a “Question and Answer” format, and was conducted for Branson Tourism Center (BTC) by Gary Groman, a 29 year resident of the Branson area, and a local columnist and freelance writer.

BTC Just for fun opener: If you were marooned on a desert island, what three things would you hope you had?
DP: Something to listen to music, my yoga mat and, right now, a book by Kent Huruf.

BTC: Where were you born?
DP: Deerfield, IL.

BTC: Any comments about your childhood that you think would be of interest to our readers?
DP: I had a really blessed childhood with two wonderful parents and two older brothers. I feel very lucky to have the childhood that I had.

BTC: When did you realize that you wanted to be an actor professionally?
DP: When I was about six years old, I did a play in the basement of a church, and I really fell in love with the art of storytelling. The name of the play was “The Reluctant Dragon,” and I played the part of Jennifer.

BTC: When did you become interested in music?
DP: In the third grade, I had a solo. It was a random song that the teacher had written, but when I sang it, my mom said, “You can sing,” and things just naturally progressed from there.

BTC: Do you have any formal training in theatre or acting?
DP: Yes. I graduated from the University of Illinois, Urbana-Champaign, with a BFA in Acting.

BTC: What type of roles do you enjoy performing the most?
DP: I enjoy roles that take me outside of myself and force me to take on characteristics and qualities that do not manifest themselves every day in my daily life.

BTC: Have you ever been to Branson before you started rehearsal for MDQ?
DP: Never. I had never even heard of Branson, but I am so glad that I did, because it’s an awesome place.

BTC: What do you like best about Branson?
DP: I love the nature and how beautiful the Ozarks are with its lakes, trails, and mountains.

BTC: What is your favorite thing to do in Branson when you are not involved with MDQ?
DP: Hiking and I have found an amazing yoga studio, Kom Hot Yoga, which I try to go to every day.

BTC: Have you seen any Branson shows? If “Yes” which ones?
DP: Yes, I have been to see the noon show at the Showboat Branson Belle, Clay Cooper’s Country Express, and Legends in Concert…twice.

BTC: When did you first hear about the musical Million Dollar Quartet (MDQ)?
DP: When it first started in Chicago a number of years ago.

BTC: Where did you audition for the Million Dollar Quartet?
DP: Chicago.

BTC: What made you decide to audition for the part of Dyanne in MDQ?
DP: I do a lot of musical theatre and have a singing background. As I researched the show prior to the audition, I fell in love with the story and the songs Dyanne sings in the show; “Fever” and “I Hear You Knocking.”

BTC: They used the real names of everyone else in the show. Why do you think that they used the name “Dyanne” instead of her real name, “Marilyn,” in the show?
DP: It’s theater; the character of Dyanne in the show is embellished for the show in terms of her involvement and participation with what actually went on at the jam session. As far as I know, Marilyn was a dancer and played no active role that night other than she was accompanying Elvis Presley. The rest of the roles, Elvis Presley, Johnny Cash, Jerry Lee Lewis, Carl Perkins, Jay Perkins, Fluke, and Sam Phillips were actively involved in the events that transpired.

BTC: Did you do any research on the historical jam session, that is the basis for the show, prior to the audition or beginning of the rehearsal for the show?
DP: Yes. I try to get as much information as possible.

BTC: What did you know about Marilyn Evans (Knowles-Riehl) prior to deciding to audition for MDQ?
DP: There’s not a lot of information about her, but I knew that she was not a very serious girlfriend of Elvis, was a dancer not a singer, and that, unlike many others, she did not try to gain anything from her association with Elvis.

BTC: What is your favorite Elvis Presley song? Why?
DP: I Love “I Can’t Help Falling in Love With You.” I just love its melody.

BTC: What part do you like most about playing Dyanne in the Million Dollar Quartet? Although I love performing the songs I sing, I enjoy the jamming, singing, and dancing in the background.

BTC: What is your favorite part in the show?
DP: That would be “Party” with Elvis and Carl right after I sing “I Hear You Knocking.” It’s a fun jam song that I have so much fun doing.

BTC: Why should someone coming to Branson plan to see MDQ?
DP: Because it is a perfect combination of amazing music that people love and have grown up with, along with a really incredible story about a real event that a lot of people have never heard.

BTC” Is there anything else you would like our readers to know about you or the show?
DP: The show has an amazing cast that is supported by an equally amazing and incredible crew behind the scenes. They take such good care of us and what they do contributes so much to the audience’s overall enjoyment of the show.

For additional information or tickets for the Million Dollar Quartet, or any of Branson’s shows and attractions, or for lodging arrangements, please contact the Branson Tourism Center by calling 1-800-785-1550, or by visiting www.BransonTourismCenter.com.