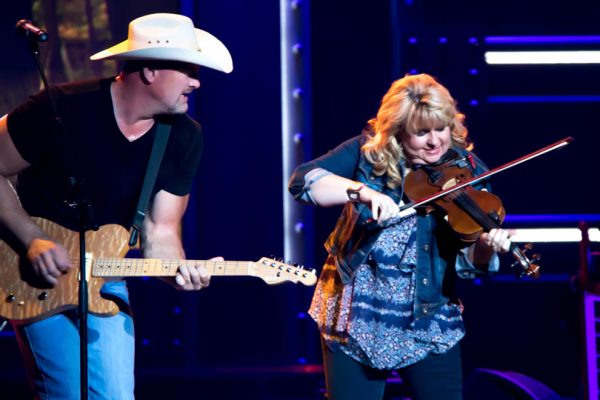 Colt Prather and Melody Hart during their spectacular performance of “The Devil Went Down To Georgia.”

Branson’s newest major show, Raiding the Country Vault, has only been open for a few short weeks and it’s the talk of Branson. For those who haven’t heard, six words pretty well sum up what all the talking’s about, “It will blow your socks off!” After seeing the show on July 7, I sure had to grab my socks and put them back on.

Devoted to traditional country music, it is an extremely well-produced show, presented by a cast who are not only masters at their craft, but obviously have a love and enthusiasm for the music they are performing. And perform it they do, with the title of an early George Straight hit, Give It All We Got Tonight, song sung early on by Billy Yates, describing the energy and passion this extremely talented cast puts forth from beginning to end.

The show includes a “lite” story line involving “Roadie” Taylor Kidd, played by Actor/comedian Luke Ashlocke, as he shares his back stage experiences about what happens on tour. Ashlocke also plays the part of country music star, Ricky Montana as he is interviewed by the effervescent Jackie Daniels, star of her TV show, Road Tales, but the shows primary focus is on legendary country music and those who made it so. 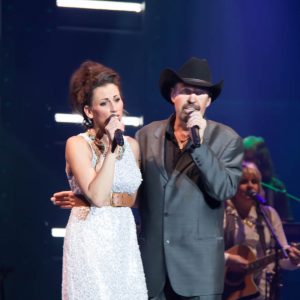 “BobC,” who saw the show, and commented about it on the Show Forum of WWW.1Branson.Com, summed the result up so well, when he wrote, “Raiding the Country Vault is a master production of the highest quality and it is devoted to traditional country music. While staying true to the traditional country sound, the music is presented with enthusiasm and attitude.” As three large screens display the name of artist who made the song famous, their history, and other information about the song itself, the cast reaches into the “Vault” and performs each, turning legendary songs from the past into what is easily one of the most amazing entertainment experiences in Branson.

Some might ask, “How can a group of musicians and vocalists, even those as talented as these, playing and singing songs from the past, provide a relevant amazing entertainment experience today?” The answer is simple, “Because they can!” From the beginning to end, this wonderful country music journey has one WOW performance after another, and it’s not just their considerable talent. Although intangible, when you sense and feel their commitment and passion to the music they are performing, it takes an already great entertainment experience and makes it an absolutely amazing one.

For each show that I review I list three highlights and, it will be no different here, but I have to say, that very seldom, have I had so many highlights to pick from. Billy Yates’ great performance of the George Jones hit, I Don’t Need No Rocking Chair had special meaning to me on two counts. Billy co-wrote it and, to me, there’s something special about hearing someone perform a song they have written and, it was the last song I ever heard, Branson legend, Lloyd Presley perform. The performance of the Charlie Daniels’ hit, Devil Went Down to Georgia, featuring Melody Hart on the fiddle, Colt Prather, on the guitar, and Billy Yates on vocal, was one of the most powerful and exciting versions of that song I have ever heard and Danielle Peck’s performance of the Tammy Wynette hit, Stand By Your Man, was beautiful.

It ended all too quickly, and is a show that should absolutely not be missed. For additional information or tickets for Raiding the Country Vault, please feel free to contact the Branson Tourism Center, one of Branson’s largest and most respected vacation planning services; call 1-800-785-1550 or visit www.BransonTourismCenter.com.