Is this a New Year’s Eve celebration of legendary proportions or what?

“Things will really be jumping on New Year’s Eve in Branson,” said Preston Garrison, Director of Operations for the Branson Tourism Center. “With a wonderful variety of ways to bring in the New Year including a party aboard Main Street Marina’s 100-foot luxury yacht Landing Princess, major fireworks displays, celebrations at hotels and other venues, and of course the famed Branson Show’s New Year’s Eve Celebrations, it’s hard to imagine a better way to welcome in the New Year than by celebrating its arrival in Branson,” he added.

He points out that it’s the titles of two of those shows, Legends in Concert and the Million Dollar Quartet, that provides Branson New Year’s Eve revelers with the opportunity to participate in a “legendary million dollar New Year’s Eve Celebration.” While having to pick one of the two, because they are both presented at the same time, each is a unique, extremely entertaining, and exciting way to celebrate the end of 2016 and the ringing in of 2017.

Where else would one expect the “legendary” celebration to come from, but Legends in Concert “We are so excited about our New Year’s Eve Celebration,” said Jeannie Horton, the General Manager for Branson’s Legends in Concert. “What could be a better way of ringing out the old year and ringing in the New Year than an exciting entertaining New Year’s Eve party at the iconic Dick Clark’s American Bandstand Theatre in Branson with the legendary ‘Frank Sinatra,’ ‘Adele,’ ‘George Strait,’ ‘The Blues Brothers, ‘Elvis Presley,’ and special guest ‘Cher,’” she added.

The festivities start as the doors to the auditorium open at 8:30 PM and revelers receive a celebration package with party favors, hats, noise makers, beads, and more, along with a deluxe box lunch consisting of a delicious croissant sandwich, potato salad, dessert and beverage. As they enter the auditorium they may pose, decked out in their full New Year’s Eve regalia, with the stars of the show. Alcoholic beverages will be available for purchase and may be taken into the auditorium to enjoy.

At 9:30 PM the party continues with a performance of the of the amazing Legends in Concert show including performances by Legends in Concert’s Frank Sinatra, Adele, George Strait, The Blues Brothers, Elvis Presley, special guest Cher, and the Legends in Concert Dancers and Band. As millions have discovered, the result is a one of a kind awesome musical production that is, in and of itself, a truly legendary entertainment experience!

The mid-night countdown, welcoming in the New Year is a spectacular event done as only Legends in Concert can do it. The show’s cast will come out on stage and countdown to the New Year with the audience amid an awesome celebration of streamers, confetti, celebratory noise makers, and join in the singing of the traditional “Auld Lang Syne.” Horton promises that it will be a wonderful memorable evening from beginning to end, and is absolutely a great way to start 2017. 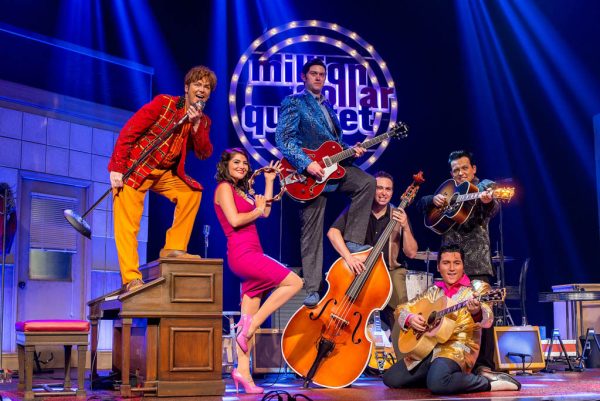 How about celebrating New Year’s Eve with the Miilion Dollar Quartet?

Although the actual 60th anniversary of the actual jam session that started it all will be celebrated on December 4th, Susan Smith, the Director of Sales & Marketing for Welk Resorts, said that the Million Dollar Quartet’s New Year’s Eve Celebration will be an entertaining, exciting, and memorable end to the 60th year of that famous jam session. She said that the evening starts off at 8:30 PM with heavy hors d’oeuvres including sliders and variety of hot dishes. Alcoholic beverages will be available for sale from the lounge and are permitted in the theatre for both the show and the midnight celebration.

At 9:45 PM the popular Million Dollar Quartet show will be presented. The show is based on the most famous impromptu jam session of all time that took place in the Memphis studios of Sun Records on December, 4, 1956. It included Carl Perkins, Jerry Lee Lewis, Johnny Cash, Elvis Presley and, but for a recording that remained forgotten in the library of Sun Records for decades, would have been forgotten. The recordings were discovered by a new owner of Sun Records and released in 1981. The stage musical Million Dollar Quartet, written by Floyd Mutrux and Colin Escott, based on that music and what transpired at the original “Million Dollar Quartet” jam session, premiered in 2007. Since then, this smash hit musical, has played in Chicago, Broadway, Las Vegas, toured extensively in the US and internationally, and has a production in Branson, Missouri, at the Welk Resort Theatre.

Smith said that after the show the audience will come out to the lobby where they will get their sparkling grape juice for the midnight toast, some neat party favors, including glow sticks, noise makers, hats, and everything else needed to celebrate the New Year. There will also be a photo station where they “can dress up and take photos.”

“Then we’ll go back in the theatre for the New Year’s countdown on our giant screen with a huge balloon drop at midnight,” she said. “But it’s not over yet; because at 12:01 AM, on January 1, 2017, the Million Dollar Quartet will come back out on stage to start the New Year off in spectacular fashion with an energetic and exciting 20 minute after party jam session,” she added.

For more information or tickets to either Legends in Concert or the Million Dollar Quartet New Year’s Eve celebration, please contact the Branson Tourism Center, one of Branson’s largest and most respected vacation planning services and sellers of almost 5 million Branson show and attraction tickets by calling 1-800-785-1550 or through their website www.BransonTourismCenter.com.