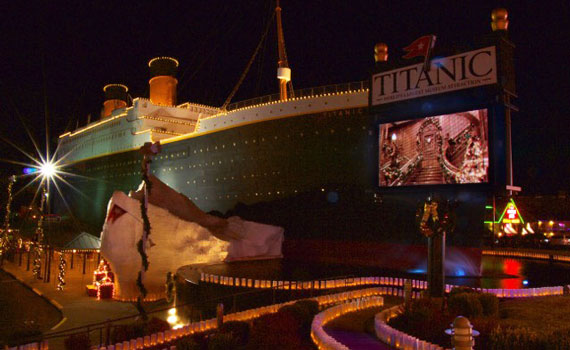 The Titanic Museum’s “Christmas and Winter Celebration” is just one of the many inspirational and entertaining events in Branson during December.

“From the stages of its famous live shows, to the magnificently lit Silver Dollar City, and its Adoration Parade, December in Branson is filled with the special spirit of celebrating the traditional American Christmas,” said Preston Garrison, Director of Operations for the Branson Tourism Center. “Then, during the week between Christmas Day and New Year’s Eve, Branson is abuzz with fun and excitement leading up to a celebration of New Year’s Eve as only Branson can do it,” he added.

Here’s our Featured Show, Event, and Limited Engagement of the Month, along with a list of the major, special limited engagement performances and events you can enjoy in Branson during December, 2016:

Featured Show: The Grand Jubilee Christmas show has it all, including amazing vocals by Branson’s award winning quartet, New South and Female Vocalist of the Year Jackie Brown; hilarious comedy with Jamie Haage, a.k.a. “Jim Dandy,” and his sidekick Mike Patrick, who is also the show’s emcee and producer; and the “Grand Band,” one of the best bands in Branson. From the preshow to the final curtain, this awesome production will entertain and inspire you with “grand” music, comedy, and the spirit of a traditional American Christmas.

“I love the show for the fact that Christmas is built on tradition and that we sing the traditional favorite Christmas songs that people sing every year,” said Mike Patrick, the shows emcee and producer. “To me our show is like taking out your favorite Christmas ornament each year and hanging it on the tree.” When asked what his personal favorite part of the show was he said, without hesitation, “When we get to read the Christmas story from the Bible and see how it resonates with our audience.” His two favorite numbers in the show are New South’s rendition of a Gatlin Brothers’ song “Santa Are You Going To Atlanta” and Jackie Brown’s beautiful performance of “I’ll Be Home For Christmas.”

Featured Limited Engagement of the Month: No doubt about it, there’s not a more “Limited Engagement” than the spectacular unique ways available in Branson to ring in the New Year. How about  cruising Lake Taneycomo aboard Main Street Lake Cruises Landing Princess, a 100 foot luxury yacht, while enjoying a live DJ, dancing, games, prizes, party favors, full-service cash bar, hors d’oeuvres, a dessert bar, and a complimentary champagne toast at midnight? Cruising not your thing, how about an entertaining and exciting evening with some of Branson’s most popular shows as they welcome in 2017 with unique awesome New Year’s Eve celebrations including:

Featured Event of the Month: The Branson Titanic Museum Attraction closes out its tenth year in Branson with its beautiful Christmas and Winter Celebration as magically, inside and out, she hails the sights, sounds and joy of the season. In addition to everything else the ship offers daily, it will be aglow with glittering lights, festive decorations, and the spirit of the Holidays, including free public access to hundreds of unique Titanic Christmas gift ideas and collectibles.