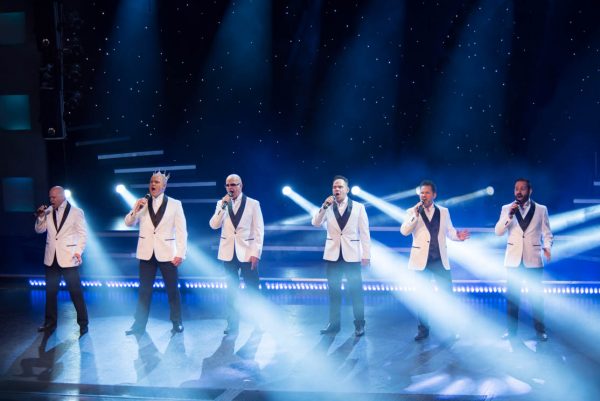 If those SIX voices belong to the Knudsen Brothers, Barry, Curtis, Kevin, Lynn, Owen, and Jak, the answer is, “Absolutely!”   I remember the first time I saw SIX in Branson; I couldn’t believe what I was hearing and not seeing. I kept looking for the band that was accompanying them, but there was none.

Even by Branson’s standards, SIX is something special! There’s great vocals with the sound of an amazing “band.”  Yet, there is not an instrument or band member anywhere in sight. That’s because the band sounds are coming from the voices of the SIX brothers simultaneously with their singing. As was the case with me, first timers, will not believe what they are seeing and hearing. As many times as I have seen them before, it still amazes me!

What they do vocally is awesome. So is their ability to relate to their audience. There’s no dead space in this show. When they are not singing they are interacting with the audience. Their mix of humor and stories entertains and transitions the audience seamlessly from one song to another. That combination results in a one of a kind show that is as entertaining as it is unique.

The core of the show is the music. What a great job they do performing a variety of music from Garth Brooks to Coldplay. It’s hard to explain, but a phrase from CBS’s prime time hit, “Big Brother,” comes to mind. “Expect the unexpected.” One minute you’re listening to Owen doing a high energy “drum” routine, with not a drum in sight. The next he’s singing a beautiful solo of the folksong, Oh, Shenandoah. And that’s just one of the SIX.

From among many WOW moments here’s three of my favorites. Lynn’s performance of the Garth Brooks classic, The River was beautiful. Lee Greenwood’s God Bless The USA, sung and “played” by all SIX, was a powerful demonstration of their unique talents. It brought the audience to its feet. Their moving a cappella Finale, How Great Thou Art, touched my heart. The simple beauty of just their voices and the song’s message was a joy to experience.

The shows lighting was outstanding, helping to show highlights and establish “moods” throughout the show. The use of the theatre’s large video screens added so much to the enjoyment of the performance. Two occasions stand out. One was during their inspiring performance of God Bless The USA and the other during Lynn’s touching tribute to their Mother, as he sang, Love Times Ten, dedicated to her memory.

While talking with Kevin Knudsen after the show he said, “This year’s show is the best show we’ve done since we have been in Branson. It’s 30 years rolled up into two hours.” When asked what his favorite part of the show was he said, “God Bless The USA.” He likes its message about what it means to be an American, and the way it seems to touch and unite everybody in the audience.”

For additional information or tickets for SIX please contact the Branson Tourism Center, one of Branson’s largest and most respected vacation planning services. They can be reached by calling 1-800-785-1550 or through their website, www.BransonTourismCenter.com .