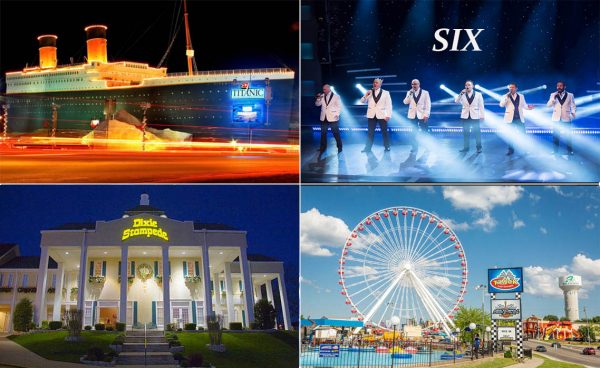 Just a small glimpse of the entertainment, fun, and adventure available in “Branson’s Entertainment District.”

“What an honor it is for Branson’s Entertainment District to be voted ‘Missouri’s Best Attraction’” said Annette Wood, Director of Sales and Marketing for the Branson Tourism Center. Wood was referring to the recent USA Today’s 2017 10Best Missouri Attractions Readers’ Choice Travel Awards voting that honor to “Branson’s Entertainment District.” “It’s even more so when you consider all the other great attractions in Missouri.”

From all of Missouri’s attractions, a panel of four “experts,” working with the editors of USA’s “10Best,” nominated 20 Missouri attractions for 10Best’s readers to vote on. The experts were Laura Heck (Missouri Life), Diana Lambdin Meyer (www.mojotraveler.com) and Susan Manlin Katzman (Sweet Leisure) who “were chosen based on their knowledge and experience of travel in Missouri.”

From the 20 nominees, 10Best readers voted for “their favorite must-see attractions in the state.” They did. The results are in; the “Branson Entertainment District is Number 1!”

In announcing the award, Branson’s awesome live shows were featured. It said, “Branson is known as the ‘Live Music Show Capital of the World,’ so it’s no surprise that this entertainment district has something for everyone. Besides 50 live performance theaters, the area has a walkable downtown with loads of shopping options.”

The quality, quantity, and variety of Branson’s live shows is legendary. Branson offers over 100 live shows every day, during the season. And what a variety! From the Amazing Pets show to Branson’s first show on the “Branson Strip,” Presleys’ Country Jubilee, and dozens in-between, there truly is “something for everyone.”

Like the pure sound of the old country classics sung by some of the greats who made them famous, Raiding the Country Vault is the show for you. Want a little variety, including some great dance routines, trick roping, and one of the best entertainers in Branson? Clay Cooper and the cast of Clay Cooper’s Country Express have all that and then some. How about spending some time with some of music’s greatest legends at Branson’s Legends in Concert, or some of the greatest music from Broadway in Broadway’s Greatest Hits?

Music’s not your thing. How about the fun and excitement of a dinner show at Dixie Stampede or the wonder Sight and Sound’s biblical spectacular, Moses? You and your family will absolutely love what the furry lovable animals at the Amazing Pets Show do. Want a little magic in you entertainment? The Illusionist Rick Thomas show is filled with stunning magic, illusions, and spectacle.

Branson Tourism Center’s Wood points out that the Branson Entertainment District encompasses more than what is referred to as the “Branson Strip.” She points out that some of Branson’s most popular shows and attractions are not on the strip. These would include shows such as the Million Dollar Quartet and Moses and attractions like Silver Dollar City.