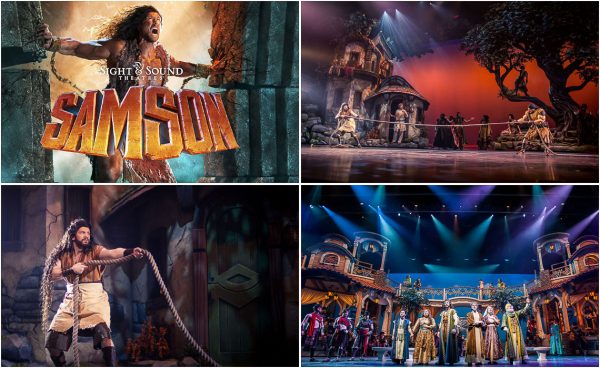 Sight and Sound’s production of Samson is as epic and spectacular as the man whose story it tells.

Sight and Sounds spectacular stage production of the biblical epic Samson is literally bringing the house down daily to the entertainment delight of Branson audiences. When responding to the question, “How do you pick your shows?” Josh Eneck, President and Chief Creative Officer of Sight and Sound Theatre’s said, “It absolutely comes from prayer with the Lord and seeking Him on what’s the best story to tell for the day and age we are in right now.”

It’s hard to imagine a better story to tell in the day and age we find ourselves in right now than that of the world’s first “super hero,” Samson, a man, like many today, who have strayed from God’s path, and need to trust in Him and His grace, to return to the His path. The story of Samson’s heroic battle with the Philistines, succumbing to temptation, losing his strength and sight but, through perseverance and by trusting in God and His grace, redeeming himself in a mighty way is well known. And who better to bring it to the stage than Sight and Sound Theatres, noted for their spectacular entertaining biblical productions?

It’s important to note however, that this show, while based on one of the most famous biblical stories of all time, stands on its own as a unique entertainment experience. It’s a show whose story, cast, music, dancing, scale, spectacle and ability to entertain does so, regardless of one’s knowledge or appreciation of the bible. It’s just an amazing entertainment experience to be enjoyed by all!

The story’s brought to life on Sight and Sound’s 300 foot surround sound stage, amid amazing sets and special effects, colorful costuming, and a host of live animals. Don’t want to spoil the surprises, but suffice it to say there’s action on the stage, up and down the aisles and overhead as the story unfolds. Ok, just have to mention one part, you’ll have to wait for it, but it literally brings the house down.

It’s a story we can all relate to, that uses the narration of Manoah, Samson’s father, to tie different elements together as he tells the story of his son, his trials, temptations, and relationships. As should be the case today, Samson’s relationship with his family played a pivotal role in developing the man who rose to the heights of success, faltered in his faith and fell to the depths of defeat, and ultimately rose again in victory. Too, it tells the story of a father and mother’s love for their son; the conflicting emotions of both Samson and Delilah as they dealt with their relationship, her ultimate betrayal, and the rekindling of Samson’s faith under the most dire of circumstances for his final act of heroism and service to his God.

The musical format under which the story unfolds is beautifully acted, sung, and danced by an outstanding cast that exudes not only a tremendous amount of talent, but a love and dedication to their performance. Two of my favorite musical numbers was the entire cast performance of the rousing “Philistia Brave and Strong” and Samson’s performance of “What Is This Grace?” during his realization and acceptance of God’s grace. The role of Manoah, Samson’s father, narrating the story really added to the overall experience.

No matter how you look at it, story wise, musically, or production wise, Samson is one incredible entertainment experience that inspires as it entertains and can should not be missed.

Prior to seeing Samson you might like to take the special Behind the Scenes Tour of the production. “A million watts of lights, sixty-thousand watts of sound, a massive stage over twenty-thousand square feet in size that wraps around the audience on three sides and four-story tall set pieces towering right in front of you.” This additional add on tour, includes exclusive backstage access to everything that happens behind the scenes and can really add to the total Samson experience.

For more information on Samson, the Behind the Scenes Tour, or other great Branson shows or lodging please contact the Branson Tourism Center, one of Branson’s largest and most respected vacation planning services and sellers of almost 5 million Branson show and attraction tickets by calling 1-800-785-1550 or through their website www.BransonTourismCenter.com .