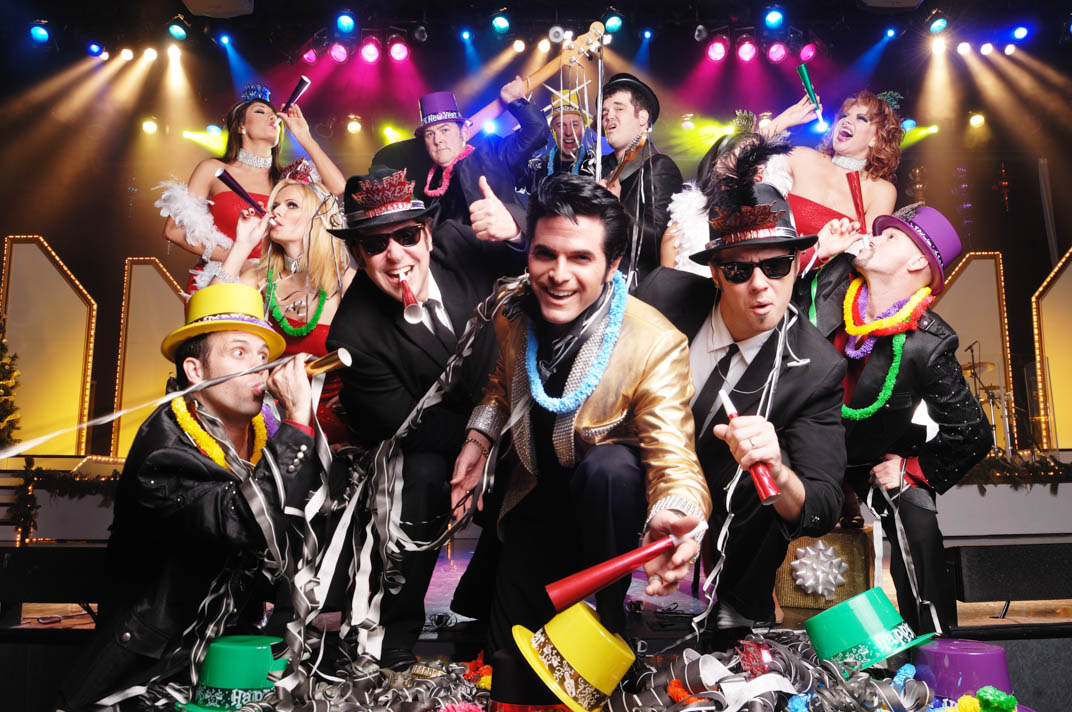 Legends in Concert is just one of the Branson shows having special New Year’s Eve Celebrations .

From “Elvis” to the world’s largest performing family and so much more, it’s doubtful that any other travel destination in America will be offering the variety of family friendly live shows that Branson is on New Year’s Eve. Even better, each show is just a part of the total excitement and fun that those attending will enjoy. Here’s an example of the choices available on New Year’s Eve in Branson:

Hughes Brothers Theatre’s From Christmas to New Year’s Eve Show! Featuring two Award winning shows “The Hughes Music Show” and the “Hughes Brothers Christmas Show,” a yummy dinner, cool “Light-Ups,” noisemakers, midnight Balloon Drop, and an after Midnight cut-a-rug, boogey down dance with the cast, and many other surprises; this celebration promises “A Good Time & Lots of Laughs.”

Celebrate New Year’s Eve with Clay Cooper and The Haygoods in Branson’s biggest family friendly party of the year the Clay-Goods Jambor-Eve. This party features performances by Clay Cooper’s Country Express and The Haygoods, gourmet Hors d’oeuvres, a cash bar, pyrotechnics, a laser show, party favors, and non-alcoholic toasts and balloon drop at Midnight. The doors open at 7:30 p.m.

Great New Year’s Eve and Day 10 a.m. Morning Show for the whole family: Grand Country’s Amazing Pets featuring, what else, but a cast of loveable cuddly pets performing feats that will amaze you.

The Americana Theatre’s New Year’s Eve Party features an “All-Star New Year’s Eve Show.” The All-Stars include the fantastic C. J. Newsome; one of Branson’s favorite comedians, Terry Sanders; the world’s only female aerialist violinist, the amazing Janice Martin; and more. Big D’s Barbeque will be catering the party and attendees an bring in the New Year toasting with either non-alcoholic or regular champagne. “Dinner’s” at 8 p.m. and the show starts at 9 p.m.

The Legends in Concert New Year’s Eve Celebration at Dick Clark’s American Bandstand Theatre, is featuring an array of truly “legendary” tribute performances including Elvis Presley, The Blues Brothers, Brooks and Dunn, Elton John, Tina Turner, and Cher. And, that’s just the beginning; the party is complete “with party favors, gourmet boxed dinners, wine and beer service, and a midnight celebration like no other.

For more information, tickets or reservations on these or other Branson shows, attractions, events, or lodging, please contact the Branson Tourism Center, one of Branson’s largest and most respected vacation planning services and sellers of over 5 million Branson show and attraction tickets by calling 1-800-785-1550 or through their website www.BransonTourismCenter.com.