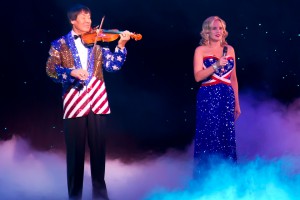 Shohi Tabuchi and his daughter Christina are just two of the many Branson stars, present and past, scheduled to perform in "Branson's Birthday Spectacular - The Show of the Century.

Branson, Mo (4/12/12) “This weekend will truly be a weekend to remember,” said Tammy Johnson, the Director of Operations for the Branson Tourism Center. “She emphasizes that not only is it the first weekend of Silver Dollar City’s World-Fest, but it is the time that Branson will remember the 100th anniversary of the sinking of the R.M.S. Titanic and Branson’s Centennial with separate history making once in a lifetime events.

Running from April 12 through May 6, Silver Dollar City’s World-Fest, America’s largest international festival, provides a unique opportunity for visitors to Branson and Silver Dollar City to experience the heritage, excitement, culture, dancing and music of countries throughout the world right in the midst of the beautiful Ozarks during one of its most beautiful times of the year. And World-Fest is in addition to all the fun and excitement the award winning 1880s styled theme park provides on a daily  basis. This includes 30 rides and attractions from “Wildfire,” a world class multi-looping roller coaster that reaches speeds up to 66 miles per hour to the park’s new $1 million “Half Dollar Holler” designed for kids through age 7; dozens of demonstrating craftsmen; some of the best entertainment and live shows available in Branson and much more all seamlessly integrated into the natural wonder of the Ozarks. 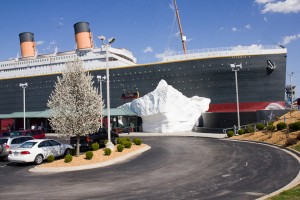 Titanic Museum Attraction hosts a special once in a lifetime experience in remembrance the 100th anniversary of the Titanic's sinking.

On April 14, the 100th Anniversary of when the Titanic struck the iceberg initiating the tragic sequence of events that would soon lead to her sinking, visitors to the Branson Titanic Museum Attraction will have a unique and once in a lifetime opportunity to become a part of history as the museum hosts a unique special day of tributes, musical performances, historic ceremonies and appearances by actual descendants of the Titanic’s passengers;  the lighting of the “Titanic Eternal Flame” and the launching of “distress fire rockets” to bring the event to a “solemn end.” One of the highlights of the ceremony will be the presentation of “A Night to Remember: An Original Musical Tribute to Titanic” with the participation of the Springfield Symphony and massed combined choirs.

The celebration of Branson’s Centennial offers Branson visitors yet another opportunity to experience a once in a lifetime event on April 15 with a one time performance of the show Branson’s Birthday Spectacular – The Show of the Century. Branson Tourism Center’s Johnson said, “It might very well be the most unique and entertaining show ever presented in Branson.” Bill Lennon, the show’s producer concurred adding, “It’s a show that will be full of history, nostalgia and entertainment, but most of all fun. After all, it’s a birthday celebration!” He said that, “from the show’s original overture, incorporating 100 years of Branson history and music, to its historical elements, entertainers and the way it is all woven together, it is truly a once in a hundred year event of special significance.”

Johnson offers the services of the Branson Tourism Center (BTC), one of Branson’s largest and most respected vacation planning services, to answer any questions about, or provide ticketing to, any of the events or attractions mentioned in this article by either calling their toll free number 1-800-785-1550 or through their website www.BransonTourismCenter.com.