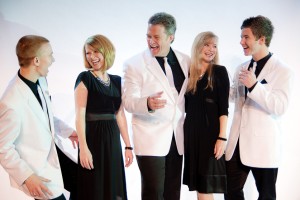 The Bretts Brydon, left, Briahna, Tom, Andrea and Garon who will be joining the show later in the year.

BRANSON, Mo. (April 9, 2012) You know it’s not going to be your typical “leap year” day when you get a call from the theatre your show is in, at about 3:45 AM telling you it has been hit by a tornado. That’s the way the Brett family started their day on the morning of February 29 and something that they, along with the Legends in Concert Show and the staff of the Dick Clark’s American Bandstand Theatre has been dealing with, on a daily basis, since.

During an interview with Brydon Brett on March 29, he said that checking on and taking care of church member’s needs and the necessary emergency administrative actions in connection with their show delayed their actual arrival at the theatre until about 10:00 AM. Brydon said, “Viewing the situation at the theatre for the first time was so emotional. Knowing how much work had been put into the brand new stage and that Legends had just opened for the 2012 season, just made you want to cry.” He went on to share that the impact them personally was compounded because they were leaving the very next day to tour Illinois and Pennsylvania.

He said that the damage people saw outside the building was just a small part of the challenges the theatre has faced and that getting the theatre up and running was a major undertaking. “I can’t tell you how grateful we are to the management and staff of the theatre and the team that was brought together. They have been unbelievable , from the very first day, working virtually around the clock to get the theatre open again as soon as possible,” he continued.

Brydon said that  being without the theatre has presented some challenges as they put the finishing touches on their new 2012 show, but they are ready for their April 16 opening and are really excited about this season. He shared that the Branson tornado will be the basis of a new unique, exciting and emotional interactive segment in the show featuring a new song that his mom, Andrea, has written called “I Will Stand.” The beautiful country ballad had its geneses during the Joplin Tornado and was completed after the Branson storm.

On April 6, the Dick Clark’s American Band Stand theatre officially announced that the theatre would be open by April 14 for the resumption of shows by the “celebrated tribute artist production Legends in Concert, who resume their six day a week schedule through the rest of the year.” The Bretts show opens April 16. “That’s great news, not only for the Dick Clark’s Bandstand Theatre, the Legends in Concert and The Bretts show, but for Branson visitors too,” said Tammy Johnson, the Director of Operations for the Branson Tourism Center.