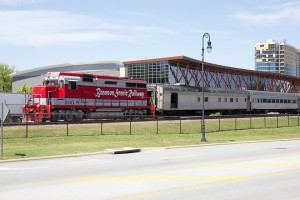 Branson Scenic Railway returning to the station on Apr. 19 with the Branson Convention Center and Hilton Hotel in back ground.

BRANSON, Mo (4/21/12) “Our ‘Branson Vacation Planners,’ each of whom proudly lives and works in the Branson area, are extremely knowledgeable about all that is going on in Branson and, on a weekly basis, answer dozens of questions about all the fun and excitement it offers as they help potential visitors plan their trip to Branson,” said Tammy Johnson, the Director of Operations for the Branson Tourism Center. “One of the topics of a number of those questions relates to the tornado Branson experienced earlier in the year,” she continued, saying that the following are typical of the questions asked. “Is there much damage left from the tornado?” “I am bringing my family to Branson later this year. I know it got hit by the tornado. Is everything open and is the strip ok?” ” How is rebuilding coming along, i.e. Branson Landing?”

During the early morning hours of February 29, the Branson area was hit by an EF-2 Tornado severely damaging some of its businesses and residences as its “touchdowns” skipped from place to place as it passed through Branson. However, national and regional media reports to the contrary, and without minimizing the effect of the tornado on those directly impacted, there were limited injuries and no fatalities. The vast majority of businesses and residences were not damaged as was the case with Branson’s tourism infrastructure; its lakes, shopping, lodging, shows, attractions and other tourist activities, receiving no, or extremely minimal, damage.

Branson’s 2012 season kicked off as scheduled. Starting with the hosting of an estimated 16,000 to 20,000 people who attended the 21st NAIA Division II Men’s Basketball Championships at the College of the Ozarks about a week after the storm; the opening of Silver Dollar City, currently conducting the country’s largest international festival, World-Fest, as it joined the vast majority of Branson’s other attractions, such as the Titanic Museum Attraction, that were already open and the blossoming of Branson’s 2012 show scene as the majority of its live shows opened, Branson has been a whirlwind of fun, excitement and adventure. Add in  Branson Centennial activities; championship fishing events; shoppers enjoying the shopping experiences provided by Branson Landing, Historic Downtown Branson, the Tanger Mall and Branson’s many specialty shops and it becomes apparent that Branson is providing visitors with the same great magical exciting experience it always has.

With the reopening of “Dick Clark’s American Bandstand Theatre” last week and the resumption of performances by the “Legends in Concert” and “The Bretts” only two of Branson’s theatres remain closed because of storm damage. Timothy Haygood, spokesmen for the Americana Theatre said that the “remodeling” of the theatre is going well and that they expect to reopen no later than the end of May. Haygood also said that the theatres shows, “Cassandre Haygood and Friends,” “Joseph Hall Elvis Rock N Remember Tribute,” “The 3 Red Neck Tenors” and “Todd Oliver and Friends” are ready to go as soon as it opens.

The Branson Variety Theatre, home of “Hooray for Hollywood,” “Shake Rattle & Roll,” “Tribute to The Four Seasons and The Beach Boys,” “The Twelve Irish Tenors” and “Christmas in Hollywood” was the first theatre hit by the storm and the one it affected the most. Information received from the theatre indicates that it will not reopen prior to September 1.

For those asking the question, “Why should I plan to visit or vacation in Branson?” the answer is simple. For the same reason that you would have come to Branson before the tornado, to enjoy the unique exciting experience that only Branson can provide.” For the latest tornado updates or any of Branson’s other shows and attractions or for lodging arrangements please contact the Branson Tourism Center (BTC), one of Branson’s largest and most respected vacation planning services by either calling their toll free number 1-800-785-1550 or through their website www.BransonTourismCenter.com.