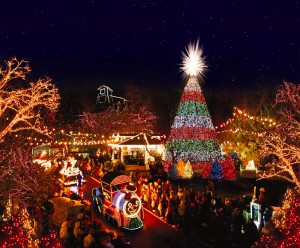 BRANSON, Mo., October 9, 2012 —  “A common question for us at this time of the year is, ‘What is Ozark Mountain Christmas?’” said Tammy Johnson, the Director of Operations for the Branson Tourism Center. She answers, “It’s a combination of things adding up to a unique Branson area wide celebration of the true spirit of a traditional American Christmas that has been celebrated for over two decades.”

From Historic Downtown Branson and Branson Landing on the shores of Lake Taneycomo on the east to Branson’s most popular paid attraction Silver Dollar City on the west, Ozark Mountain Christmas is a world class celebration of the Christmas Season. With millions upon millions of beautiful colored lights, drive through lighting displays and everything from a spectacular five story high special effects musical Christmas Tree; reindeer; Santa Claus and a “Fantasy Princess,” to Branson’s shows, attractions, shopping and other activities taking on the festive look and feel of the season, it is a unique holiday celebration unlike anything anywhere.

If that was all there was that would be plenty, but that’s not all there is. Ozark Mountain Christmas has its roots in a community that will be holding its “64th Annual Adoration Parade and Nativity Lighting Ceremony” in Historic Downtown Branson on December 2, as it gathers together to celebrate the reason for the season and honors the birth of the child for whom Christmas is named, Jesus Christ. While appreciating and respecting those who celebrate other holidays associated with that time of the year such as Hanukkah, Kwanzaa and others, Ozark Mountain Christmas is a special place for those who appreciate the traditional American Christmas and the real “reason for the season.”

A centerpiece of Ozark Mountain Christmas is Silver Dollar City’s world class festival, An Old Time Christmas, running from November 3 through December 30, and has been recognized as one of the nation’s top theme park Christmas celebrations. The 1880s-style theme park is transformed into a glowing Christmas spectacular with a twice nightly 100,000 light Holiday Light Parade; over four million sparkling lights throughout the park; one-of-a-kind handmade gifts made and showcased by Silver Dollar City’s demonstrating craftsmen; foods of the season and special shows including the Broadway style production of an original musical adaptation of “A Dickens’ Christmas Carol” and new this year, the debut of an adaptation of “It’s A Wonderful Life!” an original production with a cast of 14 strong which was produced exclusively for Silver Dollar City.

Ozark Mountain Christmas features two major drive through lighting displays, the Branson Area Festival of Lights and The Shepherd of the Hills Trail of Lights. The “Branson Area Festival of Lights” is a one mile trip through more than 175 sparkling displays, many of which are animated. It is conveniently located a few blocks from the heart of the Branson Strip. The Shepherd of the Hills Trail of Lights is a two and a half mile journey through millions of Christmas lights, hundreds of gorgeous displays, holiday music, and animated scenes most of which have been integrated into the natural terrain of the Shepherd of the Hills Homestead. It is one of the most unique and memorable drive through lighting experiences most people will ever experience and also includes a “trip to Inspiration Tower where guests can ride glass elevators up 230 feet for a “Santa’s eye view” of the lights from above.” 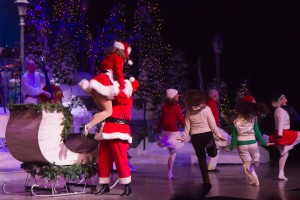 One of the many spectacular numbers in the 2011 "Andy Williams Christmas Show."

In addition most of Branson’s regular season shows also perform Christmas shows which are typically a combination of the best of their regular season show and Christmas and are as unique as the show themselves. This includes some of Branson’s most popular shows such as Shoji Tabuchi, SIX, Pierce Arrow, Haygoods, Clay Cooper’s Country Express, Dixie Stampede, Duttons, George Dyer, Hamner and Barber Variety Show, Presleys’ Country Jubilee, Yakov Smirnoff, Duttons, Hughes Brothers, Rankin Brothers, Baldknobbers, Haygoods, Doug Gabriel, Grand Jubilee and many others. Other shows such as Acrobats of China, Joseph and Legends of Kung Fu, although not having a specific Christmas segment, are spectacular and add to the fun and excitement that is a part of Ozark Mountain Christmas.

Click here for a complete list of Branson Shows including information, pictures, videos, schedules, pricing and ticketing or call the Branson Tourism Center at 1-800-785-1550.

Many of Branson’s attractions have special activities for Ozark Mountain Christmas. A partial list includes the Polar Express operated by Branson Scenic Railways from November 8 through December 22;” Titanic Christmas and Winter Celebration at the Titanic Museum Attraction from November 1 through December 31,including, new this year, “The Fantasy Princess,” from Thanksgiving Weekend to December 31st,Wednesday through Sunday and “White Flight” at the Butterfly Palace and Rainforest November 1 through January 15.

Branson is a virtual Christmas shoppers dream. “From the shops at Branson Landing on the shores of Lake Taneycomo to handcrafted items by the craftsmen and artists at Silver Dollar City’s Old Time Christmas, two major outlet malls, the shops of Historic Downtown Branson and specialty shops galore throughout Branson, Branson Christmas shopping sparkles as brightly as its Christmas lights.

A highlight of Ozark Mountain Christmas will be the 64th Annual Adoration Parade and Nativity Lighting Ceremony on December 2. The lighting ceremony will be conducted near the intersection of Commercial and Main Streets in Historic Downtown Branson at 5:00 p.m. However, when the switch is flipped it will light the giant 30 foot tall figures of a Nativity Scene located on top of Mount Branson on the opposite side of Lake Taneycomo overlooking Branson Landing and Historic Downtown Branson. The lighting ceremony is followed by one of the few, if not the only, noncommercial, lighted nighttime parades in the United States devoted to the theme of “Keeping Christ In Christmas.”

Branson Tourism Center’s Johnson says, “If you’ve ever asked yourself, “What has happened to Christmas?’ a visit to Branson during Ozark Mountain Christmas just might answer that question. She also reminds everyone that it is one of the busiest times of the year in Branson and advises advance reservations for shows and lodging.

For additional information on Ozark Mountain Christmas or for tickets or information for any of Branson’s other shows and attractions or for lodging arrangements feel free to contact the Branson Tourism Center, one of Branson’s largest and most respected vacation planning services by either calling their toll free number 1-800-785-1550 or through their website www.BransonTourismCenter.com.