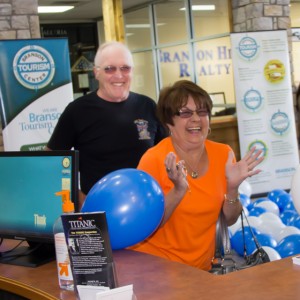 Don and Marsha Meeker right after the balloon drop.

It was their first trip to Branson and they knew that Branson was known for its excitement and friendliness, but Don and Marsha Meeker, from Remus, Michigan, were surprised at the reception they received when they arrived to check-in at the Reception Area of the Branson Tourism Center on July 2nd. Hundreds of blue and white balloons fell from the ceiling and everyone was clapping and cheering as they were informed that they had purchased the 4 millionth show and attraction ticket sold by the Branson Tourism Center.

The Meekers were greeted by Lianne and Larry Milton, CEO and co-founders of the Branson Tourism Center, and Dave Hamner, co-owner and star of Hamners Unbelievable Variety Show, one of the five shows on their Branson itinerary. They were thrilled to find out that, in celebration of their purchase of the 4 millionth ticket, that all the lodging, shows and other activities they had booked through the Branson Tourism Center for their entire six day five night Branson vacation was as guests of BTC and at no charge to them. In addition, $100 BTC Gift cards were handed out to all of BTC’s customers who were in the reception area checking in at the time the announcement was made to the Meekers.

When asked what made them decide to come to Branson for the first time Marsha said, “My parents have been here two or three times and friends have been here two or three times. Everybody that I know that has been here has either come back or said that they wanted to come back. I’ve never heard of anybody who said, ‘I will never go back to that place again.'” She pointed out that they have been trying to get to Branson for some time and were considering a bus tour, but decided to come on their own when none was available.

The 4 millionth ticket was actually sold on June 1, 2014, by BTC Travel Planner Irving Garcia, was to the Hamners’ Unbelievable Variety Show and remained a secret to the Meekers, and just about everybody else, until they checked in at the Branson Tourism Center on July 2. Garcia, a Branson Tourism Center Travel Planner, sold the ticket as part of BTCs unique, free, personal “concierge” type service, offered through a toll free phone call 1-800-785-1550, which helps potential Branson visitors plan their vacation, get answers to questions and, as was the case with the Meekers, purchase their tickets and lodging.

Marsha said she called the Branson Tourism Center when she went on line, saw their website, www.BransonTourismCenter.com, and thought that would be the right place to get Branson information. When asked if she was right, she replied, “Absolutely!” She went on to say, Even before all this happened, “Everybody, was so friendly and so helpful.”

Annette Wood, Director of Sales and Marketing for the Branson Tourism Center said, “That’s one of the great joys in selling our 4 millionth ticket; they were all sold one at a time, with the same friendliness and helpfulness the Meekers felt, to wonderful people like the Meekers.