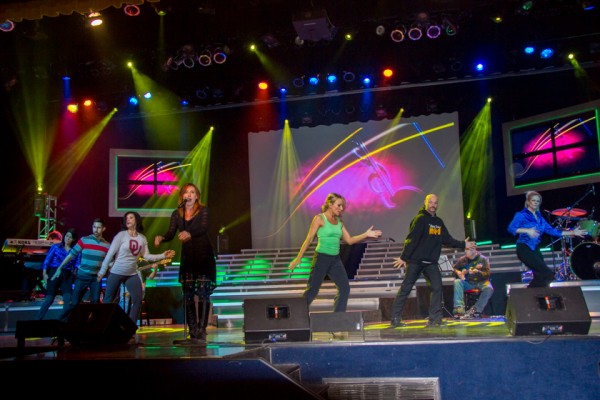 Dancers, band and Jennica McCleary, center with mike, “loading in” one of the numbers for her Bette Midler set sans costuming, spotlights and while lighting adjustments are being made in the background.

Branson’s Legends in Concert will be starting their 2015 season on February 6 with an all-star cast of talented look alike tribute performers including Todd Bradshaw as “Kenny Chesney,” Dave Lawrence as “Lionel Ritchie,” Jennica McCleary as “Bette Midler” Lori Russo as “Ann-Margret” and Ted Torres as “Elvis.” In preparing this exclusive story for the Branson Tourism Center, I had the opportunity to get a behind the scenes look at how the talent of all these great artists is melded together, with dancers, a live band, lighting, videos, special effects, sound, costuming and choreography, into the spectacular entertainment spectacle that is known worldwide as the “Legends in Concert.

In talking with Robb Horton, the shows Production Manager, he pointed out that the artistry involved in producing the show extends from the individual tribute artists to the dancers, musicians and the lighting and sound personnel. He pointed out that although each tribute performer has their own routine that has been developed over years of practice, study and devotion to their craft, the success of Legends in Concert is to showcase that talent as part of an overall production combining everyone’s collective artistic talents to present a unique spectacular entertainment experience not available anywhere else.

In terms of doing that, he broke the shows production down into six major areas beside the tribute artists themselves, dancers, choreography, costuming, band, lighting and sound. I was afforded the opportunity not only to see people working in most of these areas, but to talk with many of them as they were doing it.

Each show is broken into a “set” for each tribute artist which becomes a mini-show in itself with its own choreography, dancing, costuming, live music, lighting and sound. The shows dancers Stephanie Young, Dance Captain and dancers Cindy Dardas, Larry Miller, Aaron LeMoine, Desta Pritchett and Kenya Wilhite, with Pritchett and Wilhite also performing as back up vocalists, are featured in a variety on numbers throughout the show. 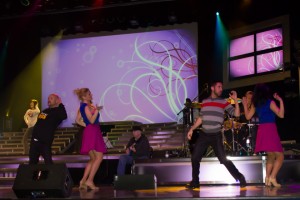 Dancers refining a routine that is featured in the set.

I had the opportunity to watch the beginning of the process as they worked the dancing into the set of Jennica McCleary as “Bette Midler” who was working with them at their first rehearsal together. It is a multistep process beginning with the tribute artist performing their vocals which are observed by Young and the dancers.

Then gradually, sometimes it seemed on a move by move basis, the choreography, dancing and backup vocals are worked into the performance. When one number in the set is done they go to the next and when they get the whole set down they practice it time and time again.

It should be pointed out that this is all being done simultaneously in conjunction with the shows live band composed of Kevin Allen, Band Leader and Lead Guitar; Eddie Howard, Drums, Lyman Clark, Keyboards and Brian Zerbe, Bass Guitar. Sound and lighting adjustments are also being made both on and off stage. 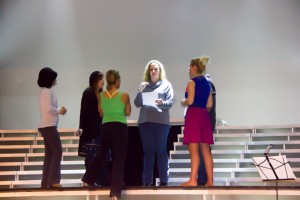 Heidi Jarret, facing out with paper in hand, working with the cast during the rehearsal.

Although there is adequate lighting during the rehearsal, the lighting seen throughout the show was absent the vast majority of the time. It was almost surreal seeing the performers perform with no spot lights etc. The amazing thing to me was the way the dancers, band and choreography started to come together even in the few hours that I was there. What a pleasure to watch these consummate professionals work together and to see a small part of what will be the final result.

Young pointed out that they do what they are doing now, “load the show,” get it ready for their audiences, four times a year now, May, September and in November for their Christmas show. In May, September and November she is the one who, in addition to her dancing duties oversees “the loading” of the show. The first show of the year is “loaded by” a representative of corporate.

When asked what the toughest part for her was, in terms of getting each new show ready, she said, “From May 1st to the end of September we do two shows a day with Wednesdays off. When we are loading in the new shows the rehearsals take place between and after the shows making for very full days. When asked what she wanted people to know about the dancers in the show she said, “We work our tails off, but we do it because we love it and every single person up there has a passion for it and giving our audiences a great performance.” 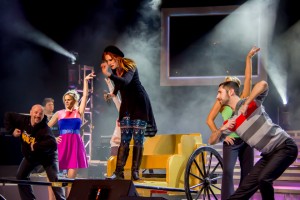 Different props and elements are slowly added as the “set” is “loaded” into the show.

Although Legends in Concert has state of the art lighting and sound systems it is artistry of how the output of those systems is interwoven into the show that adds immeasurably to the experience the audience receives. Timothy Young, the shows Lighting and Video Director points out that unlike the show’s choreography where corporate furnishes a DVD that can be followed, he uses the equipment to custom design the lighting for each performer and number in each show. He said, “I kind of go with what I feel the music is saying and what I feel it should look like.” Most of the original programming that he does is done after everyone has gone home and into the wee hours of the morning as he listen to the music and programs the lighting and video accordingly.

Russell Bullock, the shows Technical and Sound Director points out that, like the lighting and video, the sound has to be tuned and levels adjusted for each performer and number that they sing during the show. Even as the rehearsal was going on he was on stage checking levels and making adjustments.

She said that from a show production stand point Branson’s Legends in Concert is wonderful to work with. They have already received the choreography, Stephanie has it “set” and ready to go and all she has to do is help put the finishing touches on it to allow it “to develop into the beautiful flower that it is.” It was a joy to watch the way she interacted with everyone on the set to implement the “finishing touches” and to see the first budding of “the beautiful flower” that Branson audiences will experience when Legends of Concert opens its 2015 season on the evening of February 6.