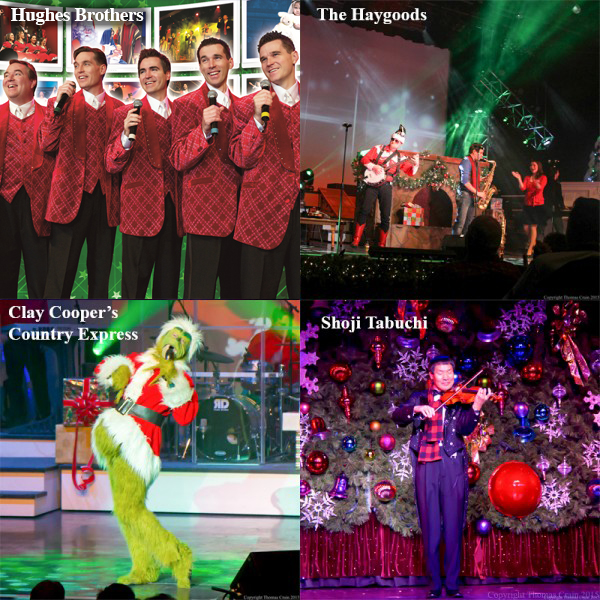 From the “Grinch” to the Nativity and true meaning of Christmas, Branson’s Christmas shows are full of color, fun, and the “Reason for the Season.”

“…it will create wonderful Christmas memories that will last a lifetime,” said Annette Wood, Director of Sales and Marketing for the Branson Tourism Center. “Christmas is one of the most exciting times of the year in Branson, and nowhere is that more obvious than at our shows. Each is like an exquisite ornament on a Christmas tree, adding unique beauty, fun, and spirit to the Christmas season.”

Here’s a list of things about our Christmas shows you might want to consider while planning your visit to Branson:

Most Christmas shows end their season in mid December: Many shows hold their last Christmas performance by the end of the third week in December. These include some of Branson’s most popular shows: Presleys’ Country Jubilee, Andy Williams Christmas Show, Christmas Wonderland, Dublin’s Irish Tenors and the Celtic Ladies, Duttons, Mickey Gilley, New Jersey Nights, Shoji Tabuchi, SIX, and George Dyer. Other popular shows such as Billy Dean in Concert With Jarrett, Clay Cooper’s Country Express, Grand Jubilee, Haygoods, Hughes Brothers Christmas Show, Legends in Concert, Paul Harris and the Cleverlys, Christmas on the Trail, and Dixie Stampede are open through the third week in December or beyond.

Early reservations are highly recommended: Ozark Mountain Christmas is not only one of the most special seasons for a visit to Branson, it can also be one of the busiest. The limited Christmas show schedules can make the demand for tickets even greater; so early reservations are very important, not only to ensure availability, but to get the best seats. Branson Tourism Center, a company that’s sold more than 4.5 million Branson show and attraction tickets, has a special relationship with its theatre partners. This relationship helps their customers not only get the show tickets they desire, but also the best possible seats available at the time the tickets are purchased. Branson Tourism Center can be reached by phone at 1-800-785-1550, or through their website at www.BransonTourismCenter.com.