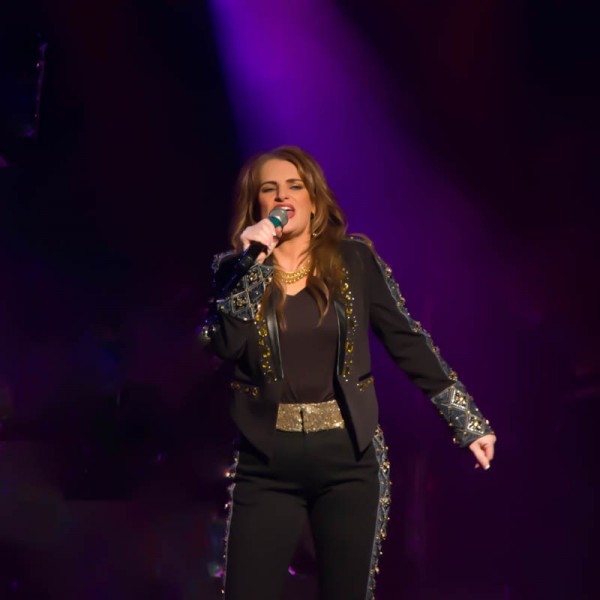 Jackie Brown during recent Grand Jubilee performance of “When I Think About Angels.”

Grand Country’s Grand Jubilee is one of Branson’s most popular shows, combining the vocals of New South, the comedy of “Jim Dandy,” the MC mastery of Mike Patrick, and the award-winning vocals of Jackie Brown into two hours of fantastic entertainment! Recently, Jackie took time from her busy schedule as an entertainer and mom to share a bit of herself, and her career, with us in an interview for “Branson – Up Close and Personal.”

“Branson – Up Close and Personal” is a service of Branson Tourism Center, one of Branson’s largest and most respected vacation planning services, and is intended to provide readers with an up-close-and-personal look at a Branson star or personality. The interview with Jackie Brown (JB) uses a “Question and Answer” format, and was conducted for Branson Tourism Center (BTC) by Gary Groman, a 30 year resident of the Branson area, and a local columnist and freelance writer.

BTC: Where were you born?
JB: Phoenix, AZ

BTC: When did you first start singing?
JB: When I was four.

BTC: When did you first sing publicly?
JB: I was four and sang in church for a Mother’s Day Pageant with my mom.

BTC: Do you remember the name of the song?
JB: “Jesus Loves Me” and “You Light Up My Life.”

BTC: Do you have any formal vocal training?
JB: No. My mom was an elementary school music teacher. I just followed her lead, learned from her choir practices, and taught myself from some of the things that she taught me.

BTC: What is your favorite genre of music?
JB: I have no one favorite because I like so many different styles.

BTC: What is your favorite song to listen to?
JB: I love to listen to Frank Sinatra and Bing Crosby, but outside of Christmas and “Baby It’s Cold Outside,” I don’t have a favorite

BTC: What is your favorite song to sing?
JB: I’ve always liked singing “I Will Always Love You,” which I sing in the show this year in a duet with Luke [Menard], or as a solo if he isn’t here.

BTC: When did you realize that you wanted to sing professionally?
JB: When my mom and I visited Opryland in Nashville when I was about sixteen or seventeen years old; we went and saw the show “Country Music USA.” I told my mom, “I want to do that. That’s what I want to do for a living.” We went back to Opryland when I was about 20, I auditioned, was hired, and the rest is history.

BTC: When did you first start performing professionally?
JB: Although we had a local band in Phoenix, I consider Opryland as the start of my professional career.

BTC: Do you remember the first number you performed professionally?
JB: I do, it was “Independence Day,” by Martina McBride.

BTC: Where else did you perform prior to coming to Branson?
JB: Dollywood, Disney Cruise Lines, and Country Tonite in Pigeon Forge.

BTC: While there, did you get to meet and perform with some country music legends?
JB: Actually we did; at Opryland I got to perform with some of the Grand Ole Opry stars such as Porter Wagoner, Jeannie Seely, Margo Smith, and others.

BTC: Did you ever get the chance to meet Dolly Parton?
JB: At Dollywood, she was the producer of the show, which was the story of her life. She worked with us and when she was in town she would sometimes surprise us, and come sing on stage with us.

BTC: Do you have a little-known fact about yourself that you think our readers would be interested in?
JB: While at Opryland, they picked me to be “Country Rose Barbie.” It’s the only Grand Ole Opry Barbie Doll that Mattel ever had. They hired two of us who looked alike, one to be the interviewer spokesperson, and me to sing. We were each dressed like the doll and I was the singer who introduced her on national TV, on the Grand Old Opry Show singing the Loretta Lynn song, “You’re Looking At Country.” It was a lot of fun!

BTC: While in Pigeon Forge, did you meet anyone else who was to be a large part of your life?
JB: Yes, I met my future husband, guitar player Matt Hanshaw, while we were working there.

BTC: What brought you to Branson?
JB: Matt had come to Branson while I was still working at Country Tonite in Pigeon Forge. It was a sudden move. He got the call in Pigeon Forge that the job was available on a Saturday, and he was in Branson on Monday. With our schedules, I didn’t get to see him for three months when we each drove part of the way and met in Paducah, Kentucky. I finished out my contract with Country Tonite and moved to Branson in January of 2004. Matt and I were married on August 23, 2004.

BTC: How long have you been performing in Branson?
JB: I started performing at Country Tonite in Branson in March of 2004.

BTC: What was your first impression of Branson?
JB: How compact the strip and its entertainment is compared to Pigeon Forge, and the “non-prideful” proudness it emanated.

BTC: What is your favorite thing to do in Branson when you are not performing?
JB: Watch movies at home after the show.

BTC: What do you like best about performing in Branson?
JB: The loyalty and family atmosphere of the entertainment community.

BTC: Prior to becoming the featured female vocalist in Grand Jubilee, what other Branson shows have you performed in, if any?
JB: Country Tonite, Legends in Concert, and The Entertainers at the Andy Williams Moon River Theatre.

BTC: If you could perform or meet with any one entertainer/person (living or deceased) who would it be and why?
JB: Amy Grant. She’s the I one grew up listening to, and I have always loved her style and voice. I would give anything to be able to sing in a duet with her someday.

BTC: Do you have a favorite Amy Grant song?
JB: “If These Walls Could Speak.”

BTC: In your career, of all the performances you have been in, no matter how big or small, which one personally meant the most to you and why?
JB: Singing as “Country Rose Barbie” on the Grand Old Opry Show.

BTC: Do you have a favorite hobby or activity, and what is it?
JB: I love do-it-yourself projects and yard sales.

BTC: Do you have a “little known” fact about yourself that you think our readers would enjoy?
JB: I love to cook when I have time. People just love my “Baked Chicken Nachos.”

BTC: What is the funniest thing that has happened to you in front of an audience?
JB: There’s a lot to pick from, but one that stands out is the day I forgot to zip my skirt while performing in the Country Tonite Show here in Branson. I had hooked it, but forgot to zip it for a bluegrass number that required a lot of movement and, every time I turned or pivoted around, unbeknownst to me, the audience got a view of my derriere and thong. Clay Cooper, who was performing in the number with me, whispered, “Your skirt’s unzipped.” I was horrified and immediately reached behind and zipped it. Adding to my embarrassment was the fact that the mike was still in my hand when I reached behind to do it, and caught the sound of the zipper going up. An embarrassing situation became more so, and I was as red as the red skirt I was wearing.

BTC: How long have you been performing with Grand Jubilee?
JB: I started with the Grand Jubilee in 2008. For many of those years, I also performed in the Comedy Jamboree, but have not been doing that for the past couple of years so that I can spend more time with our son.

BTC: What part of this year’s do you personally enjoy performing the most?
JB: Performing “Let It Go,” from Disney’s “Frozen.”

BTC: Why?
JB: It’s a little different number than we normally do in the show and challenging because of the costume change with all its accessories, but I really like it because of the audience reaction; especially the kids, they love it.

BTC: Why should someone coming to Branson plan to see the Grand Jubilee?
JB: Because it’s one of Branson’s best kept entertainment secrets. Although not a secret to us, when people see the show for the first time, a typical reaction we hear a lot is, “Wow, we were blown away, we didn’t know it was going to be this good!”

For additional information or tickets for the Grand Jubilee, or any of Branson’s shows and attractions, or for lodging arrangements, please contact the Branson Tourism Center by calling 1-800-785-1550, or by visiting www.BransonTourismCenter.com.