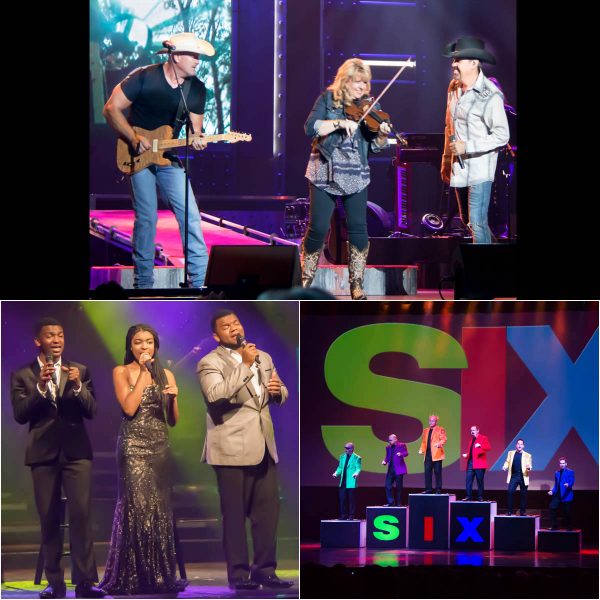 Three of Branson’s most popular shows, Raiding the Country Vault, Ayo starring the Voices of Glory, and SIX will all have new venues for their 2017 Branson season.

“The Grand Country Music Hall kicks off the amazing 2017 Branson show season on January 12, as the Grand Jubilee opens its 2017 season,” said Preston Garrison, Director of Operations for the Branson Tourism Center (BTC.) “We thought it would be timely to publish a ‘concise ultimate’ Branson Show Guide, containing links to the shows that have furnished their 2017 show schedules and appropriate information to us, for publication and ticket sales; new Branson shows that we are aware of; shows moving from one theatre to another; and the ‘limited engagement’ performances by national touring stars, as of January 7, 2017,” he added.

Garrison points out that, at this point, Branson’s 2017 Show Schedule is an evolving thing and that, although some Branson’s shows have not furnished their 2017 show schedules and other appropriate information, most of our Most Popular Shows have. Branson Tourism Center’s Show Schedule contains not only scheduling information, show descriptions, pictures, videos, and ticket pricing but, more importantly, is one of the, if not the most, current Branson Show Schedule available. It is updated immediately, as changes occur.

Here is a list of new Branson shows, and current shows, that are moving to new theatres in 2017 that we are aware of as of January 7. It includes links to those who have furnished us their 2017 show schedules and appropriate information for publication and ticket sales. It should be noted that the links refer to listings in Branson Tourism Center’s Show Schedule:

Garrison said that Branson’s regular shows provide a variety and quality of entertainment easily rivaling that of any tourist destination in America. That entertainment experience is further enhanced throughout the year as nationally recognized touring stars perform limited engagements in Branson. The following list, current as of January 7, will be updated in Branson Tourism Center’s Show Schedule as new stars are added:

Branson Limited Engagements as of January 7, 2017

For more information on these or other great Branson shows or lodging please contact the Branson Tourism Center, one of Branson’s largest and most respected vacation planning services and sellers of almost 5 million Branson show and attraction tickets by calling 1-800-785-1550 or through their website www.BransonTourismCenter.com.