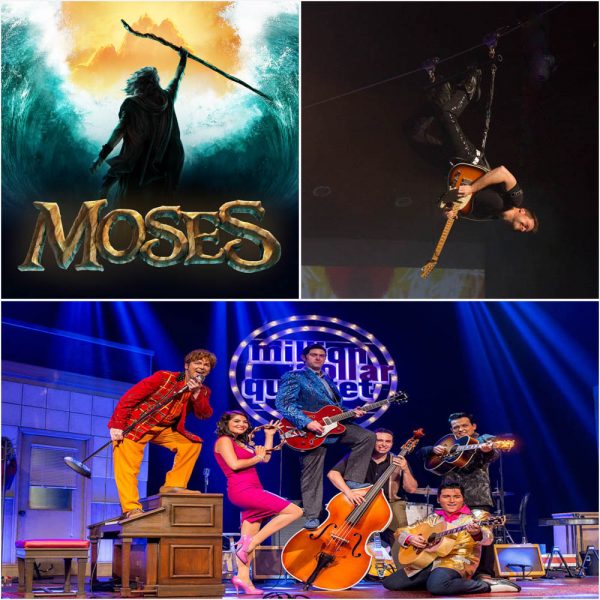 Moses. The Haygoods, and the Million Dollar Quartet illustrate the breadth of entertainment that Branson shows offer.

“It’s absolutely amazing that so many people have the mistaken opinion that Branson shows are predominately country,” said Annette Wood, Director of Sales and Marketing for the Branson Tourism Center. “While Branson’s rich live entertainment tradition is rooted in country music and humor, as reflected by the celebration of the 50th anniversary of Presleys’ Country Jubilee this year, and it offers many great country music shows, an examination of some of Branson’s most Popular Shows, indicates the majority of those shows are not country at all providing a marvelous variety of live entertainment for Branson show goers to enjoy.”

Here’s three of Branson’s most popular shows that illustrate this point:

Million Dollar Quartet: This Tony Award winning musical is based on an actual, one time impromptu jam session involving four young performers in the early stages of their career, Carl Perkins, Elvis Presley, Johnny Cash, and Jerry Lee Lewis that took place on December 4, 1956, in the storefront recording studio of Sun Records, in Memphis, TN.

The storyline, the historical moment in rock & roll history it tells, and the way it is artfully woven around timeless music that everyone knows and loves, brings the excitement and spontaneity of that almost forgotten jam session to life. Add an outstanding cast, great production, the show’s unique set and the result is an incredible entertainment experience for the whole family that should not be missed.

The Haygoods: Many sibling singing groups are blessed with a God given sound that makes their harmonies a joy to hear, but The Haygoods have that blessing along with an instrumental talent that is amazing! When the Haygoods combine the two, a synergy is created that just must be experienced to be believed.

The music, energy, action, and special effects of The Haygoods show will captivate and hold the interest of all adults and most children simultaneously throughout the show. As the ads say, “Where else can you check out a guitar-playing LED robot rocking out to ‘The Cotton Eye Joe’” or “see an amazing harp player performing in a magical light up dress.” In a town filled with great live entertainment, this show is a WOW on so many levels. It should not be missed!

Moses: This powerful and epic biblical story follows Moses on his quest for personal identity; what that meant as he decided to follow his God and, unbeknownst to him at the time, change the course of human history. Journey back to that time with your family and witness some of the greatest moments in biblical history; experience the exhilaration and celebration of the Israelites as they brush past you on their path to freedom; feel God’s awe-inspiring power as you sit amid the parted Red Sea, and the moment God first speaks to Moses at the burning bush, all presented as only Sight and Sound can do.

“While maintaining its inspirational biblical perspective, Moses is the most spectacular, technologically advanced show that Sight & Sound Theaters has ever put on stage,” said Mike Pitman, the Business Development Manager for the theatres. He said that people expect the inspirational and spectacular from Sight & Sound, but Moses takes it to an entirely new level! That’s saying a lot, especially when one considers some of the other Sight and Sound productions that have been presented in Branson such as Noah – the Musical, Miracle of Christmas, Joseph, and Jonah. Moses will be performed from March 4 through October 20, at which time it will conclude its 2017 season to make way for the spectacular Miracle of Christmas which will run from November to December 30.