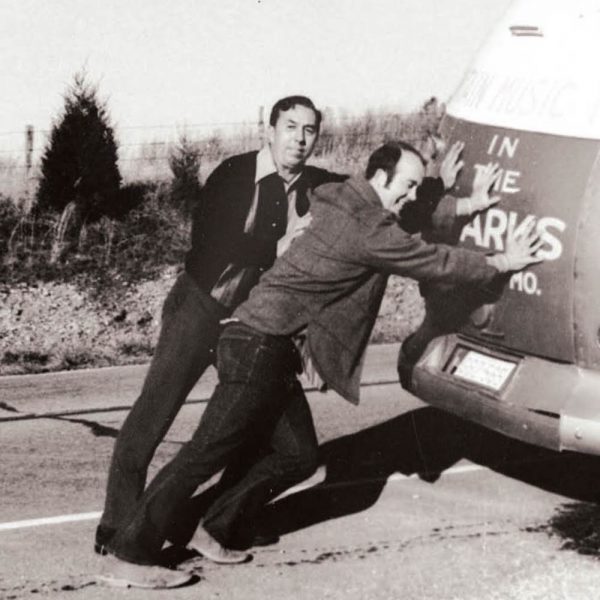 Breakdowns were just one of the challenges of “life on the road.” Lloyd seems to be letting Gary do the heavy pushing here.

When the Presleys opened Branson’s first live music theatre on the now famous “Branson Strip” 50 years ago, it was just the first step in realizing their dream of being able to make a living from their country music and comedy show. To loosely paraphrase a quote from the movie, Field of Dreams, “Just because you build it doesn’t guarantee they’ll come!” Who knew that 50 years later, Presleys’ Country Jubilee would be one of Branson’s most popular shows and that “Presleys’ Theatre” would become an icon?

Oh, they had a new theatre, and a great show filled with music and comedy that people loved. The challenge was marketing it to get enough people to come to the show to keep it financially viable. It was a challenge compounded by the fact that it was 1967 and the theater and show were located on Highway 76, a curvy two-lane stretch of blacktop tourists used to get from the relatively unknown city of Branson, Missouri, to the growing “Silver Dollar City,” “Shepherd of the Hills,” and “Table Rock Lake.”

During the season, they used brochures and other strategies such as taping bumper stickers to cars with masking tape during the intermission to advertise the show. In those days, there was no “Ozark Mountain Christmas,” the Branson season was over by the middle of October, and marketing, outside of Branson was done primarily by word of mouth from those who had seen and enjoyed the show.

What better way to market the show, and Branson, than by taking it on the road and sharing it with potential Branson visitors during the off season. The hope was not only that those seeing the road show would come to Branson, but that they would spread the word about Branson and “Presleys’ Country Jubilee,” throughout their area by word of mouth.

From the very first season in 1967, and for nearly 25 years after that, except for taking a break from mid-December through the end of January each year, the Presleys spent just about every weekend performing their show throughout Middle America. Not only did they perform and market their show, but they marketed the growing tourist destination of Branson, Missouri and all it had to offer. Steve Presley says, “The road shows were not only a way to help pay our entertainers in the winter, it was a way to advertise our show and bring people to Branson.”

Don’t confuse the tour buses you see in movies and on TV with the Presley’s tour bus. Their first bus was a 20-year-old 1948, “Flxible” which was more like “a revamped school bus with a heater that sometimes worked,” rather than the grand tour buses that come to most people’s mind.

Although they subsequently purchased a used 1964 GM 4106 bus, not only were the traveling quarters far from luxurious, but the trips were not exempt from flat tires, bad weather, sickness, engine malfunctions, and more. When their traveling days were over, Lloyd Presley, reflecting on those days, said, “Loading a bus in three or four feet of snow…we don’t miss that.”

Eric “Cecil” Presley, the son of Gary “Herkimer” Presley, said that he, and his brothers Scott and Greg, literally grew up on those bus tours, recalling that his parents built a crib in the front seats of the bus. “While it was work for dad and grandpa, for us kids every weekend was a big adventure. We really cherished those times,” he added.

Eric said that they sold the GM bus about 25 years ago, but about a year and a half ago they tracked it down and found it in a field in Kentucky. He adds, “We purchased the bus and have it back in our possession. We’ve got some plans for it and are going to integrate it, at some point, into the theatre.”