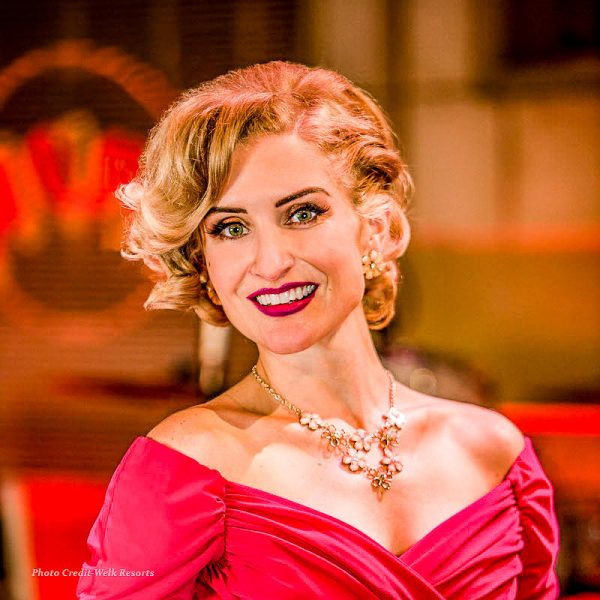 The smash hit show Million Dollar Quartet, at the Welk Resort Theatre in Branson, tells the story of a unique, impromptu, one time jam session consisting of four young recording legends-to-be: Carl Perkins, Elvis Presley, Johnny Cash, and Jerry Lee Lewis. The events of what took place in the storefront recording studio of Sun Records on December 4, 1956, come to life on the Branson stage in the awesome musical production of this Tony Award winning show.

Accompanying Elvis Presley that night was a young Las Vegas dancer. Although, she all but disappeared from any public mention with him after that night, her presence, that night, is the basis for the character “Dyanne” in the show. In this edition of ” Branson Up Close and Personal,” the fun loving Lindsey Perenchio (LP), an accomplished vocalist, dancer, and choreographer, who plays the part of “Dyanne” in this unique “ground shaking,” Branson entertainment experience, is going to share with us.

“Branson – Up Close and Personal” is a service of Branson Tourism Center (BTC), one of Branson’s largest and most respected vacation planning services. It uses a “Question and Answer” format to provide readers with an up close and personal look at a Branson star or personality. The interviews are conducted for the Branson Tourism Center by Gary Groman, a 32 year resident of the Branson area, local columnist, and freelance writer.

BTC: If you could perform or meet with any entertainer (living or deceased) who would it be and why?
LP: Janice Joplin because I think she was an amazing entertainer who died too early. She was the epitome of a rock star and had awesome musicality.

BTC: In your career, of all the performances you have made and you have been in, no matter how big or small, which one personally meant the most to you and why?
LP: When I was 19, I was hired to be a singer for the touring company of the Radio City Rockettes Christmas Show, which I performed in Branson. It has special meaning because I learned so much about the business while performing with them.

BTC: What’s the story on Lindsey Perenchcio’s 2015 Choreography Reel on U Tube?
LP: I love doing choreography. When I was in college I majored in musical theatre and minored in dance and graduated from Milliken University with a Bachelor of Fine Arts with a major in musical theatre and a minor in dance. I have always been a dancer and was a choreographer for many years and that’s what inspired that video.

BTC: Are you a singer, dancer choreographer or all of the above?
LP: All the above.

BTC: What do you like most about playing “Dyanne” in the Million Dollar Quartet?
LP: Getting to perform with this great cast! They are so talented and so much fun to be around.

BTC: Whether you’re in it or not what’s your favorite part of the show?
LP: I’m not in it, but I love the performance of the gospel song, “Down By the Riverside”, by the guys. They seem to be having a really good time and the audience enjoys it so much.

BTC: What’s your favorite part of the show that you perform in, no matter how major or minor the role?
LP: My first song in the show, “Fever.”

BTC: Why should someone coming to Branson plan to see the Million Dollar Quartet?
LP: It’s different than most shows in Branson. It’s a Tony Award nominated Broadway musical with characters and dramatic roles and music that everyone knows and loves. It provides a wonderful total entertainment experience.

BTC: What is your favorite Elvis Presley song?
LP: His performance of the Don Gibson hit, I Can’t Stop Loving You.

BTC: Where were you born?
LP: I was born in a hospital in Janesville, WI, just over the Wisconsin border from Harvard, Illinois, which was where I grew up.

BTC: Was there something special about your childhood that you think our readers would be interested in?
LP: How awesome my Mom was! She passed away when I was 20, but my childhood was very much inspired by her. She was a pretty phenomenal lady, a teacher and an inspiration to our whole community, but especially to me.

BTC: When did you realize that you wanted to sing professionally?
LP: I started dancing when I was six. My first public performance was a tap dance in Delevan, Wisconsin where I took dance when I was little and I have been dancing and singing ever since. When I was in dance ensemble in college they asked me to choreograph a piece. It was then I realized that I really liked doing it and it has been a passion of mine eversince.

BTC: What is choreography?
LP: It’s the conceptualization of the whole creative look on stage. You have to think of levels, what you can work with, how many people you have, and the energy and style of the song. Essentially, it’s the entire energy of the piece.

BTC: Do you have any formal vocal, dancing or acting training
LP: Yes, all of the above. I have been taking dance since I was six, voice lessons since I was in high school, and got my college degree in musical theatre and dance.

BTC: When was the first time you visited Branson?
LP: In 1999 when I performed at the Grand Palace in the Radio City Rockettes Christmas Show.

BTC: What was your first impression of Branson?
LP: I thought it was really interesting, unique, and unlike any other place I had ever been before.

BTC: What do you like most about Branson?
LP: I love the outdoor aspect of it. I love hiking, boating and the beauty of the area.

BTC: What do you like most about performing in Branson?
LP: The audiences. I like that you get to meet and greet them. Many come back repeatedly and it means so much to us to see them siting in the audience.

BTC: What’s your favorite thing to do in Branson when you are not performing?
LP: I like to be out in our boat on Table Rock Lake.

BTC: Do you have a “little known” fact about yourself that you think our readers would like to know?
LP: Even though I am a performer, I have a fear of public speaking

BTC: Married…Children?
LP: Yes, to a Branson Fireman. We have two boys ages 12 and 4.

For additional information or tickets for the Million Dollar Quartet, or any of Branson’s shows and attractions, or for lodging, please contact the Branson Tourism Center by calling 1-800-785-1550, or by visiting www.BransonTourismCenter.com.