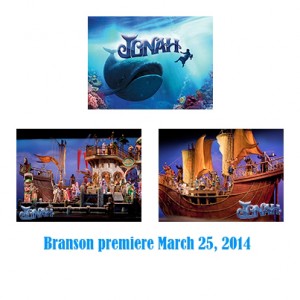 Sight and Sounds "Jonah" is a spectacular biblical production for the whole family.

Having lived in and written about the Branson area for the past 28 years, this is the time of year that is the most exciting for me. It’s not only the anticipation of spring and the opening of the new Branson season, but the metamorphosis of all the effort that Branson puts into presenting their visitors with something that is constantly fresh, new and exciting becoming a reality each year. It may be a new $1.7 M water ride, a complete renovation of a theatre’s auditorium, opening of new shows or attractions or a myriad of other things that keeps Branson on the cutting edge of the fun, entertainment and adventure that makes it the outstanding relevant travel and vacation destination it is.

One of the major highlights of 2014 is the opening of Jonah which will be presented as only Sight and Sound can do it with their 2000 seat theatre, a 300 foot stage that wraps around three sides of the audience virtually engulfing them in the action, elaborate sets that are up to 40 feet high and an assortment of live animals that brings the bible to life in a spectacular way. “Experience all the up’s and downs of the Bible’s most misdirected prophet, ‘Jonah,’ whose story is filled with humor, soul-stirring music, incredible special effects and the amazing ‘underwater’ scene.” It is “an exhilarating fun-filled journey that carries you over land and sea, across deserts, into royal palaces – and deep within the belly of a big fish” and is a production that the whole family will enjoy.

“And that’s just the beginning,” said Annette Wood, Director of Sales and Marketing for the Branson Tourism Center. “From the unique Elvis Lives, kicking the season off with a limited engagement just in time for Valentine’s Day, to Osmond’s American Jukebox and new magic, music, limited engagement and animal shows, Branson’s live entertainment scene for 2014 is bursting at the seams with excitement and variety,” she added. New 2014 Branson shows include, among others, Billy Dean Live!, Chris Perondis Stunt Dog Experience, Dublin’s Irish Tenors and the Celtic Ladies, Hamner’s Unbelievable Variety, Illusionist Rick Thomas, Magnificent Seven, Sha-na-na Rockin Christmas Show, The Lettermen and more.

The annual “Branson Shuffle” has resulted in many shows having a new home for 2014. Some of the major changes include one of Branson’s hottest shows, The Haygoods moving into the Clay Cooper Theatre along with and Joseph Hall’s Elvis Rock N Remember Tribute  and  another of Branson’s hottest shows, the Clay Cooper’s Country Express; Buck Trent to the Baldknobbers Theatre; 70’s Music Celebration Starring Barry Williams to the Hughes Brothers Celebrity Theatre;and the Rankin Brothers moving to the Yakov Smirnoff Theatre to perform 8 PM shows. 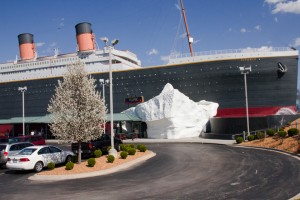 The Titanic Museum Attraction pictured amid the beauty of spring which can't come soon enough this year.

From a Branson Attractions perspective White Water’s new $1.7 M 240 foot “Kapu Plummet” water ride starting with a drop-floor drop through a 70 degree plunge into a spiraling loop ride and is promised to be the biggest thrill in “White Water history.” Construction of the new “Branson Auto and Farm Museum,” after its demolition as a result of the 2013 Tornado, is about complete and will result in a bigger and better facility than what was there before. Although no formal completion date has been announced, construction on the new “Parakeet Pete’s Waterfront Zipline” is proceeding. When completed it will provide a unique ride departing from Branson Landing and traveling across Lake Taneycomo to an observation platform high on the side of Mount Branson. From there riders will have a unique and inspiring view of historic downtown Branson, Branson Landing, Main Street Lake Cruises and Lake Taneycomo. When they leave the observation platform they will zip back across the Lake to the original starting point on Branson Landing.

The Branson Titanic Museum Attraction, is always offering something new and fresh for its “passengers” to experience. This year they are featuring a new gallery honoring the eight musicians on the Titanic. As the great ship sank and the final “sadness and sorrow of that dark night” approached these heroic musicians played on. It has been said that “When the music stopped the legend began.” This gallery tells their individual stories and commemorates their courage and gallantry.