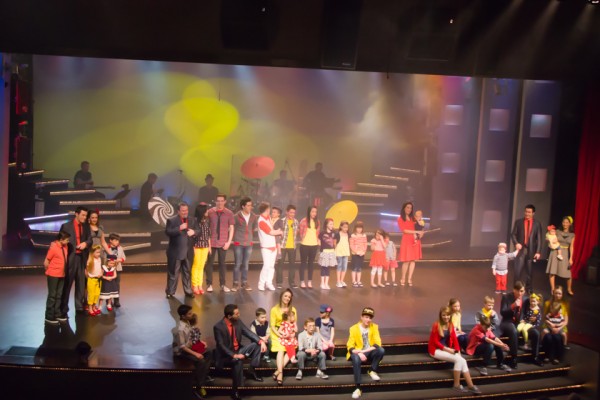 The beautiful and touching conclusion of the whole family performance of  “So Happy Together.”

Simply put, “it’s a miracle,” but more on that later. Earlier this year, right after seeing it starring the Hughes Brothers and their families, I wrote a review of the show for the Branson Tourism Center (BTC) in which I said, “The Hughes Family is billed as the largest family performing together on stage. The Hughes Brothers, Marty, Jason, Adam, Ryan and Andy are the stars of the show which also prominently features their very talented wives Cindy, Vikki, Carina, Mara and Becky along with about 32* of their children…”

The ages of the children range from toddler to age 21 and I was absolutely amazed by their performance in the show. So much so that I wrote, “Every element of this show is a polished entertainment gem. It’s not just a matter of putting kids in a show. These kids are good!” In fact they were so good that I decided to see if I could get the answer to the question, “How do the Hughes’ kids do “it?”

Recently, two of the Hughes Brothers and their wives, Marty and Cindy along with Jason and Mara, were kind enough to sit down with me to explain the kids’ involvement in the show. In talking about the kids in the show, Jason, the show’s producer, said that from the brothers, our wives down to the youngest child, people coming to our show are not going to see a family trying to put on a show; they are going to see a real top notch professional show with children that are as good as any child in the business and the miracle of it is that they are all in one family.

We used a question and answer format for the interview with this writer asking the questions for the Branson Tourism Center (BTC) and one or more of the Hughes Family (HF) members answering. Except for the last question, the answer are not specifically identified as to a specific person, but to the group as a whole and are designated by the HF:

BTC: How do you get them to do it?
HF: The kids just want to do it. They just naturally want to be like daddy and mommy and then there is the “peer pressure” of seeing their brothers, sisters, cousins, aunts and uncles all performing.

BTC: At what age do you start them?
HF: Some have started in the womb as their mothers performed, and many if not all, have performed in the Nativity scene from their Christmas show which features a live baby Jesus each year.

BTC: How do you prepare the younger children so that there is a consistent level of performance in the show?
HF: Particularly, with the younger children, whether or not they perform on any given day is up to them. That’s why we double or triple cast their parts.

BTC: How do they progress to the amazing performance levels that the audience sees in the show?
HF: From an early age they feel at home on stage. By the time they are 4 or 5 they are ready to go and as they grow older we try to up the ante as to the difficulty of what they are doing. It’s interesting the way the progression works. We have younger kids coming into numbers while older kids are graduating out.

BTC: Is there flexibility for the kids to do the things other kids get to do?
HF: Absolutely. We are extremely flexible and modify schedules etc. so that the kids can take time off to go to camps, do things they want to do and participate in other activities with their friends.

BTC: What kind of commitment do the kids make to the show?
HF: They just want to do it and be up on the stage with the rest of the family. Especially with the older ones, they know we are counting on each other. Obviously, particularly with the younger children, there are some challenges occasionally and that’s why we multiple cast some of the parts and have some scheduling flexibility.

BTC: What is one of the biggest challenges of involving the kids in the show?
HF: Coordinating schedules and consistency. With 34 kids in the show sometimes it just seems like there’s something different every day from someone having to go potty to changing a diaper to needing different kids at rehearsal for different parts at different times. Jason said, “With all that, there’s just not quite anything like finally getting the kids in the car, getting to the theater and picking up your four year old only to realize they are not wearing any shoes.”

BTC: Do the kids rehearse a lot?
HF: We are so proud of the effort our kids put into not only preparing, but performing. The amount of time spent depends on what they are doing in the show. Even just having the kids walk out on stage requires rehearsals for blocking and where they are going to stand etc. As their involvement in the show increases so does the rehearsal time.

BTC: There are 34 kids in the show now. How many children do each of you have in the show?

BTC: How are the kids schooled?
HF: They are home schooled with tutors used on a supplemental basis.

BTC: In about a sentence, what one thing would you want people to know about the kids appearing in the show?

Marty: They are better for it because they are learning a work ethic.
Cindy:  The kids really love what they are doing!
Myra:  They love each other and working together with their aunts and uncles and being able to run up to Grandma’s office.
Jason: They are really good and the miracle of it is that they are all in one family.

How good is this show? Well my opinion is in the review that I wrote, but yesterday, April 7, 2015, I was having breakfast with my good friend Arlan who, along with his wife Linda, has seen many Branson shows over the years. As we were eating breakfast he asked if I had seen “it’ with the Hughes Brothers?” It was a rhetorical question because he continued on by telling me that he and Linda had seen it for the first time recently and really liked it. He said the show was one of the best he has ever seen in Branson, he is going to recommend it to others and commented on how amazing the kids were. We had a chuckle when I told him I had seen it, felt the same way and was actual in the midst of doing a piece on the kids.

* The actual number could fluctuate by a couple performance to performance.