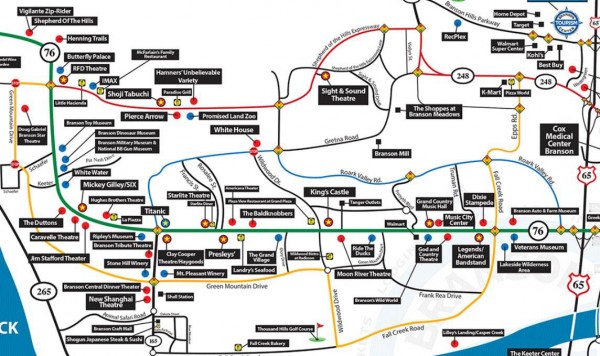 At first glance, it appears that the wrong term, “Roads” instead of “Rhoades” was used in connection with the word “Scholars,” but that’s not the case. We are actually referring to “Roads Scholars,” as in making traveling around a more pleasant part of the Branson experience. Does Branson have a lot of traffic during its season? We sure hope so; but the challenges of getting around in that traffic are no worse in Branson than those encountered in most major travel destinations. With a little planning, these challenges can be reduced if not eliminated entirely.

As we use the term “Roads Scholar,” it simply applies to a person who knows the three things that can have them driving around Branson like a local. These three things are; knowledge about Highway 76, the key to efficient Branson travel; the Alternate Colored Route System; and targeting your destination to either Highway 76 or the Alternate Colored Route System. Let’s take a look at each of these in order:

Highway 76 is also referred to as “The Branson Strip.” It’s easily Branson’s most traveled road and runs east and west through the entire length of town. With its three block Main Street extension, running east from the intersection of Highway 76 and Business Highway 65, through historic downtown Branson to Branson Landing, Highway 76 extends from Silver Dollar City, on the west, to Branson Landing, and the shoreline of Lake Taneycomo on the east.

The majority of Branson’s theatres, including some of its most popular shows, are located on Highway 76. These include, among many others, Legends in Concert, Dixie Stampede, Grand Jubilee, Amazing Pets, Illusionist Rick Thomas, Presleys’ Country Jubilee, Clay Cooper’s Country Express, The Haygoods, Billy Dean In Concert With Jarrett , Ayo starring Voices of Glory, it starring the Hughes Brothers, and SIX. Most of Branson’s major attractions are located on Highway 76, including the Titanic Museum Attraction, The Track Family Fun Parks, Hollywood Wax Museum, Ripley’s Believe It or Not, White Water, the Butterfly Palace and Rainforest Adventure, and many more.

One way or another, either because of wanting to or having to, it is a virtual certainty that you will be traveling on Highway 76. The key to doing so efficiently, and avoiding frustration, is to simply keep direct travel on Highway 76 to a minimum during peak travel times, and to use Branson’s Alternate Colored Route System to help you do so.

Because it is the main east/west Highway link to and from Branson, and because most of Branson’s theatres, attractions and major shopping areas are on it, Highway 76 is heavily traveled throughout the day. Typically, this causes minimal if any inconvenience except for the peak periods.

The traffic generally becomes heavier and more concentrated during two peak periods; one is between approximately 5:30 PM and 8:00 PM when people are trying to eat and get to shows. The other is on Sunday, between about 9:30 AM and 1:00 PM, the time-frame when many people are try to exit Branson at the same time. These periods would be excellent times to use Branson’s Alternate Colored Route System to avoid travel on Highway 76 as much as possible.

Branson’s system of three alternate colored routes – Blue, Red, and Yellow – is overlaid on existing highways and roads. In general, these routes are an alternate to Highway 76, paralleling it, for the most part, in an east and west direction. A little time spent familiarizing yourself with these colored routes, and the “north-south” connector roads between them and Highway 76, will help you get just about anywhere in Branson you want to go with little, if any,

Here’s a couple examples of how Branson’s Colored Route System can help:

Investing a little time with a map and planning a route to your initial Branson destination, for your daily travels while in Branson, and to your exit from Branson can make your time here more enjoyable. A simple way to do this is to “target” your destination by relating it to Highway 76 or an alternate colored route on a map. This way, you have a point of reference should there be a problem.

Unfortunately, many online maps and GPS services ignore Branson’s Alternate Colored Route System. The good news is that, in the vast majority of cases, the maps available online through Branson based businesses and in printed form at many places in Branson, including the Branson Tourism Center, not only show the Alternate Colored Routes, but also a lot of the major shows, attractions, and other things that Branson has to offer, making it extremely easy to target your destination. The Branson Tourism Center’s online map, which can be viewed online or downloaded and printed in PDF format, is one such map.

If you have any questions about directions or need information or tickets for any of Branson’s shows and attractions, or if you need lodging arrangements, please feel free to contact the Branson Tourism Center, one of Branson’s largest and most respected vacation planning services, by calling their toll free number 1-800-785-1550 or by visiting www.BransonTourismCenter.com.