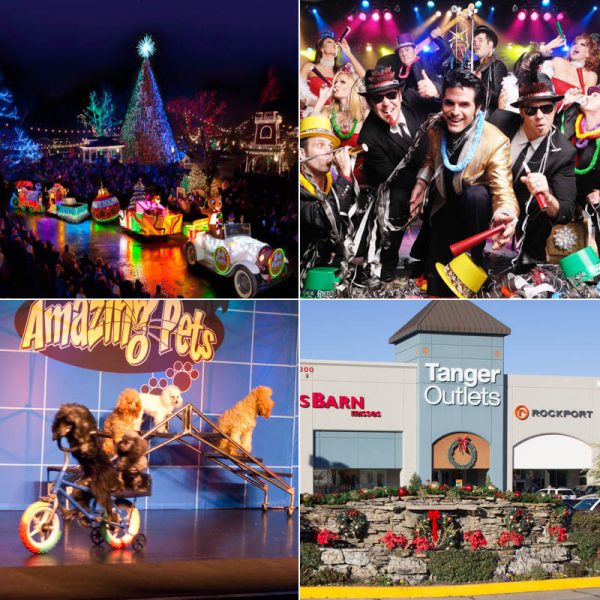 “Branson’s Christmas Week, the week between Christmas and New Year’s Day, offers Branson visitors the same world class shopping and entertainment experience that makes Branson one of the premier vacation destinations in America,” said Preston Garrison, Director of Operations for the Branson Tourism Center. “From tigers and butterflies, to acrobats, drive through Christmas lighting displays, museums, world class shopping, New Year’s Eve celebrations second to none, and so much more; if you’re looking for fun, entertainment, excitement and adventure as part of your Christmas vacation then Branson’s Christmas Week in Branson is the place for you!” he added.

Although the award winning 1880s styled theme park, lit with over 5 million sparkling Christmas lights, is filled with shows; crafts; unique shopping; food; weather permitting, dozens of exciting rides and demonstrating craftsmen; and other activities, something special begins to happen each evening at dusk, in the Square on Main Street. First, the 5-Story Special Effects Christmas Tree comes to life, with its 350,000 colorful sparkling LED lights, choreographed to Christmas music, and making over 100 light changes per second. In its glow, “the most famous reindeer of all” leads Rudolph’s Holly Jolly™ Christmas Light Parade with its nine musical floats, illuminated with 200,000 ultra-bright LED lights; 33 colorful costumed characters, including Bumble the Abominable Snowman, 14-foot moose characters, 12-foot tall elves and 10-foot candy canes, plus penguins, elves and a troupe of marching wooden soldiers.”

2. Branson Shows: Although many of Branson’s shows are closed for the season, some of its most popular shows will be open during Branson’s Christmas Week presenting the live entertainment for which Branson is noted. This includes, in alphabetical order, The Acrobats of China, Amazing Pets, Clay Cooper’s Country Music Express, Comedy Jamboree, Dixie Stampede, Grand Jubilee, Hamner’s Unbelievable Variety, The Haygoods, Hughes Brothers Christmas Show, Legends in Concert, Million Dollar Quartet, Moses, Pierce Arrow and the Showboat Branson Belle along with many more.

3. Branson Attractions: In addition to Silver Dollar City, the majority of Branson’s other attractions will be open offering visitors a range of exciting adventures and activities. How about an up close encounter with the tigers and other big cats at the National Tiger Sanctuary; a ziplining adventure on Branson Zip Lines, or an entertaining interactive experience aboard Branson’s Titanic Museum attraction. In addition to everything else the Titanic offers its passengers on a daily basis, it’s celebrating its spectacular Christmas and Winter Celebration, as magically, inside and out, the ship “hails the sights, sounds, and joy of the season” and is aglow with glittering lights, festive decorations, and the spirit of the Holidays.

And that’s just the beginning! With museums as varied at the Branson Dinosaur Museum and the World Largest Toy Museum, the unique “White Flight” exhibit at the Butterfly Palace & Rainforest Adventure; the Promised Land Zoo, hiking on one of our beautiful Ozark trails, golf, fishing, and so much more, it’s hard to imagine a travel destination, anywhere near Branson’s size that could offer more.

4. Spectacular Christmas Lighting Displays: Although Christmas Day is past, all the major drive through Christmas lighting displays will remain open through December 31. This includes the Shepherd of the Hills Trail of Lights, Ozark Mountain Christmas Lights & Village, Branson’s Gift of Lights and the giant 30 foot nativity scene on top of Mount Branson overlooking Lake Taneycomo and historic downtown Branson.

5. Branson Shopping: Shopping is an important part of the Branson experience and Branson’s Christmas Week is no exception. From the quaint specialty shops offering arts and crafts and one of a kind items; to the shops of Historic Downtown Branson, featuring “Dicks 5 & 10,” the unique “Branson Landing,” with its 100 retail stores, and outlet malls such as “Tanger Outlets” and “The Meadows,” Branson’s Christmas Week shopping will satisfy the most avid shopper.

6. New Year’s Eve: From the midnight fireworks at the Chateau on the Lake to a New Year’s Eve party while cruising Lake Taneycomo aboard Main Street Lake Cruises Landing Princess, a 100 foot luxury yacht, or one of the unique celebrations by one of Branson’s shows, both 2016 and Branson’s Christmas Week fade away and 2017 emerges as only Branson can do it. It’s hard to imagine a more unique, entertaining or exciting New Year’s Eve than one spent with some of Branson’s most popular shows as they welcome in 2017 with their unique New Year’s Eve celebrations including:

Branson Tourism Center’s Garrison advises advanced planning and reservations for any trip to Branson during the Christmas Season because of the off season scheduling of shows, limited seating, and the fact that some Branson lodging facilities are closed. He suggests that an easy way to avoid problems, save time and, in many cases, money, is by simply calling the Branson Tourism Center, toll free at 1-800-785-1550 and talking with one of their Branson based Travel Planners who will be delighted to answer any questions and assist in making any show or lodging reservations. There is absolutely no charge for this service.