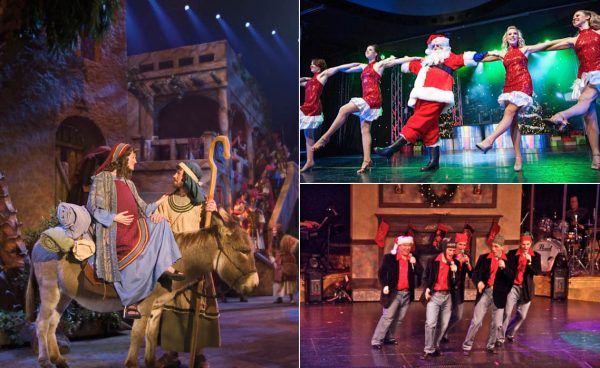 “Ozark Mountain Christmas is a spectacular two-month, one-of-a-kind, celebration of the traditional American Christmas,” said Annette Wood, the Director of Sales and Marketing for the Branson Tourism Center. “It has millions of Christmas lights, drive through Christmas lighting displays, festive Christmas decorations, great shopping, and a world class theme park, but many tourist destinations have that.  What they don’t have is Branson’s Live Christmas shows to go with it!” she added.

All year long, Branson’s shows light up the stage with a variety and quality of unique entertainment that is unrivaled.  Wood points out that doesn’t change during Ozark Mountain Christmas. “What changes,” she said, “is that they sparkle with ‘the reason for the season,’ and are as personal and unique as the ornaments on a Christmas tree.”

The Christmas shows are presented in one of two formats. One is shows that are totally Christmas. These include Andy Williams Christmas Extravaganza, Sight and Sounds’ Miracle of Christmas, Christmas Wonderland, Hughes Brothers Christmas Show, Dixie Stampede, The Texas Tenors, and others.

Many of Branson’s most popular shows will close out their 2017 season, including their Christmas shows by December 17. These include Presleys’ Country Jubilee, Andy Williams Christmas Show, Duttons, and George Dyer. Other popular shows such as Dixie Stampede, Clay Cooper’s Country Express, Dublin’s Tenors and the Celtic Ladies, New Jersey Nights, Grand Jubilee, Haygoods, Hughes Brothers Christmas Show, Legends in Concert, Million Dollar Quartet, and  SIX remain open. It’s a good idea to check the individual show schedule, particularly for those remaining open after December 17, because they operate on abbreviated schedules.

Ozark Mountain Christmas is not only one of the most special times of the year to visit Branson, but it’s also one of the busiest. It is suggested that you make reservations to insure availability and get the best seats. For more information on Branson’s Christmas Shows please contact the Branson Tourism Center, at 1-800-785-1550 or through their website, www.BransonTourismCenter.com.