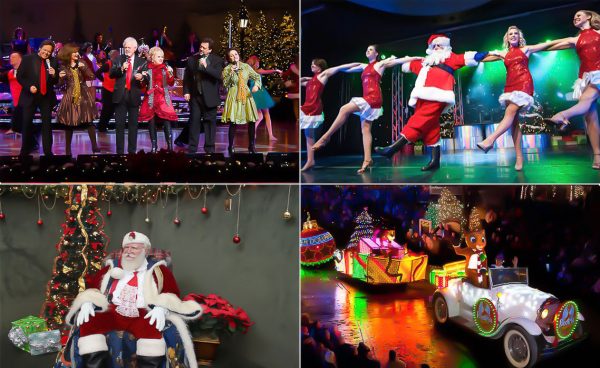 “If you want a place where the spirit of the traditional American Christmas is honored, Branson, Missouri is for you,” said Annette Wood, the Director of Sales and Marketing for the Branson Tourism Center. “It’s a spectacular two-month celebration of the traditional American Christmas, Ozark Mountain Christmas, is like none other in the world. What other travel destination has Branson’s genuine Christmas spirit and live shows combined with millions of Christmas lights, drive through Christmas lighting displays, festive Christmas decorations, great shopping, an award-winning world class theme park, and so much more? None that we know of!” she added.

1. See One of Branson’s Live Christmas Shows: Branson is known for the variety of and quality of its live shows. During Ozark Mountain Christmas most of Branson’s most popular shows celebrate Christmas and the real “reason for the season,” starting with their first show in November. Branson’s Christmas shows are generally presented in one of two formats. One is shows that are totally Christmas. These include Andy Williams Christmas Extravaganza, Christmas Wonderland, Hughes Brothers Christmas Show, The Texas Tenors, Dixie Stampede, Sight and Sounds Miracle of Christmas, and others.

Many of Branson’s most popular shows will close out their 2017 season, including their Christmas shows by December 16. These include Presleys’ Country Jubilee, Andy Williams Christmas Extravaganza, Duttons, George Dyer, New Jersey Nights, and many more. Other popular shows such as Dixie Stampede, Clay Cooper’s Country Express, Dublin Tenors and the Celtic Ladies, Grand Jubilee, Haygoods, Hughes Brothers Christmas Show, Legends in Concert, Million Dollar Quartet, and SIX, remain open longer. It’s a good idea to check the individual show schedule, particularly for those remaining open after December 16, because they operate on abbreviated Christmas schedules.

3. 69th Adoration Parade and Lighting Ceremony – On Sunday, December 5 at 5:00 PM, the Branson community will gather together to celebrate the true meaning of the Christmas season. The theme of the Lighting Ceremony and Parade is “keeping Christ in Christmas.” In keeping with that theme, the evening starts with the lighting of the giant 30-foot Nativity Scene near the top of Mount Branson overlooking Lake Taneycomo, Branson Landing, and Historic Downtown Branson. It’s immediately followed by a night “light parade” with dozens of bands, floats and walking units participating. The colorful and festive parade is themed to “keeping Christ in Christmas,” with no commercial advertising permitted on the floats.

“And that’s just three ideas from many,” said Wood. “Even if you can only visit for a couple of days, you can still enjoy the heartwarming charm of Christmas in Branson and the fun, excitement, and spirit of Ozark Mountain Christmas.

Ozark Mountain Christmas is not only one of the most special times of the year to visit Branson; it’s also one of the busiest. It’s suggested that you make reservations to insure availability and getting the best seats. For more information, or help with tickets and lodging, contact the Branson Tourism Center, at 1-800-785-1550 or through their website, www.BransonTourismCenter.com.