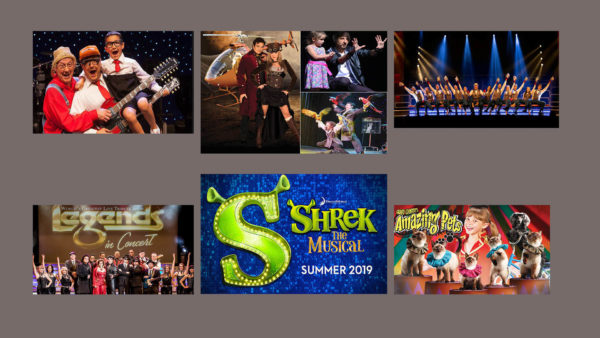 From three generations of Presley comedy to the magic of Jim Thomas, Reza, and the Hamners;, the talent of the Hughes Music Show’; Legends in Concert; into the swamp with Shrek; Amazing Pets; and others there’s a Branson show that your child will enjoy.

“Finding a quality Branson Show is no problem. It’s known far and wide for the quantity and quality of its live shows,” said Preston Garrison, Business Unit Manager, for the Branson Tourism Center. “Picking a single show that your child will be excited about seeing however, from all the choices available, depends on a number of factors. Among others, these include the child’s interests, age, attention span,” he added.

Garrison works for the Branson Tourism Center who has sold over 5 million Branson show and attraction tickets. Many of these tickets were sold to families visiting Branson with children.

When marketing a show, it’s very common to say something like, “There’s something in our show for everyone.” That’s very true in most cases, but, in many shows, for most children, it’s for a relatively short part of the show. Some shows, however, are more likely than others, to hold the interest of children throughout more of the show because they have been specifically designed to do that.

Here’s some things to consider that can help you select a show that your child will be enjoy:

Does the show feature a main character, theme, or animals that will appeal to your children? Most children will enjoy a show featuring a character they recognize, magic, action, or animals. Some Branson shows that fit this bill would be Branson’s newest show, Shrek The Musical, Amazing Pets, The Amazing Acrobats of Shanghai, Hamners’ Unbelievable Variety Show, Dolly Parton’s Stampede, Reza Edge of Illusion, Buckets and Boards, and Illusionist Rick Thomas among others. Some of the older children might enjoy one of the concert styled tribute shows such as Jerry Presley’s Elvis Live, Legends in Concert, Liverpool Legends and many others.

Does the show have enough color, action, and spectacle to hold your child’s interest throughout the show? Is there enough color, spectacle and action intermixed throughout the show, whether intended specifically for children or not, to hold their interest? Presleys’ Country Jubilee is an excellent example of this type of show. The unique comedy of “Herkimer” and his son “Cecil,” combine with outstanding music into a show that has been successfully and continuously entertaining families visiting Branson since 1967. Others are the Grand Jubilee, with the New South Quartet, the vocals of Jackie Brown, and the hilarious high-jinks of the colorful “Jim Dandy,” and the amazing talent, high energy, and special effects of The Haygoods.

Does the show have performers in it that your children will relate to on a peer to peer basis? This one is tricky because it’s not just a matter of having children performing; it’s about the quality of their performance and how it relates to the total entertainment experience of the audience. Most of these shows are music-based shows and are designed to entertain both kids and adults simultaneously. Key peer to peer children performances are strategically placed throughout the show and integrated with the performances of the adult stars of the show. This helps hold the interest of both children and adults throughout the show.Outstanding examples of this type of show would be the Duttons, Clay Cooper’s Country Express, and the Hughes Music Show. The action, energy, glitter, glamour, colorful costuming that is constantly being changed, dancing, and singing of the shows like Broadway’s Greatest Hits at Kings Palace is another example of this type of show.

Do your children have the attention span to sit through the show? This is primarily age related and something only the parent or adult thinking of taking a child to a show would know. If after considering the factors listed above the answer is “No,” then it might be advisable to spend the time and money enjoying one of Branson’s many other activities such as the Titanic Museum Attraction, a sightseeing cruise aboard the river boat replica Lake Queen, the Shepherd of the Hills Trout Hatchery or any one of the dozens of other Branson Attractions.

For additional information on any of the shows or attractions mentioned above, please contact the Branson Tourism Center, one of Branson’s largest and most respected vacation planning services by calling 1-800-785-1550 or through their website.