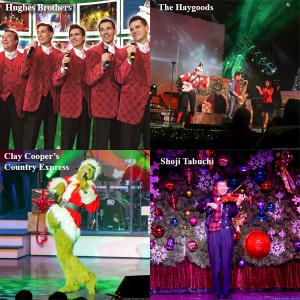 From the “Grinch” to the Nativity and true meaning of Christmas, Branson’s Christmas shows are full of color, fun, and the “Reason for the Season.”

“It is highly unlikely that any other travel destination offers the selection, quantity, quality, and spirit of Christmas shows that Branson offers,” said Annette Wood, the Director of Sales and Marketing for the Branson Tourism Center. “All year long, Branson’s shows sparkle with that unique Branson spirit, but they just glow in an extra special way as most celebrate Christmas, and ‘the reason for the season,’ with their audiences in a very unique and personal way,” she added.

They are part of Ozark Mountain Christmas: Ozark Mountain Christmas, from millions of Christmas lights to Christmas shows, and so much more in-between, is a combination of things that add up to a unique Branson area wide celebration of the true spirit of a traditional American Christmas; one that has been celebrated in Branson for over two decades. Branson’s live shows are a wonderfully entertaining, unique, and inspiring part of that celebration.

Most Christmas Shows end by mid-December – Many of Branson’s most popular shows close out their season by the end of the second week in December. These include Presleys’ Country Jubilee, Andy Williams Christmas Show, Mickey Gilley, Shoji Tabuchi, Duttons, and George Dyer. Other popular shows such as Billy Dean Live!, Doug Gabriel’s #1 Hits Tribute Show, Christmas Wonderland, Clay Cooper’s Country Express, Dublin Tenors and the Celtic Ladies, New Jersey Nights, Grand Jubilee, Haygoods, Hughes Brothers Christmas Show, Legends in Concert, Million Dollar Quartet, SIX, Paul Harris and the Cleverlys, Christmas on the Trail Chuckwagon Dinner Show, and Dixie Stampede are open to the end of the third week in December or beyond.

Make Reservations early to ensure availability and get best seats! It’s no exaggeration to say that Ozark Mountain Christmas is not only one of the most special times of the year to visit Branson, but it’s also one of the busiest. The limited time these shows run and the demand for their tickets makes it imperative to make early reservations, not only to insure availability, but to get the best seats. In this regard, Branson Tourism Center, the company that’s sold more than 4,000,000 million Branson show and attraction tickets, has a special relationship with its theatre partners. This special relationship helps insure that their customers not only get tickets, but get the best available seats at the time they are purchased. Branson Tourism Center can be reached by phone at 1-800-785-1550 or through their website www.BransonTourismCenter.com.

Last chance to create a special Christmas memory with Jonah: One of Branson’s most popular shows, Sight and Sound’s spectacular biblical production, Jonah, will hold its last Branson performance on December 31. Although not a Christmas show, it is certainly related to the “reason for the season,” and seeing it together with your family would make a wonderful Christmas memory!